A Revolutionary New Look at How Planets Are Born 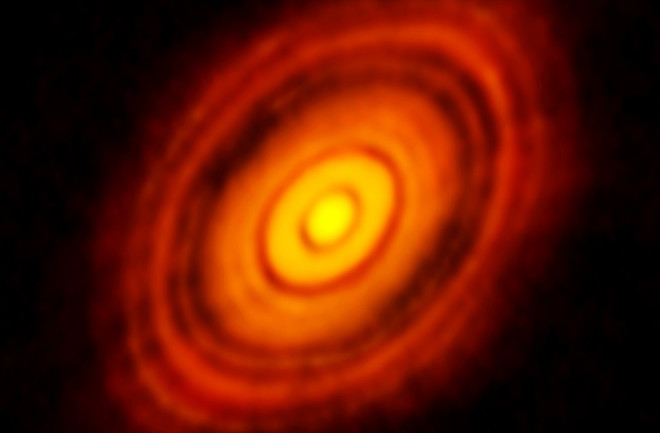 HL Tauri, an infant star in the constellation Taurus, is surrounded by a swirling disk of gas and dust. The dark rings mark places where planets are forming. Right there, right now! (Credit: ALMA (ESO/NAOJ/NRAO) It truly is revolutionary, Or you could call it the holy grail, or the smoking gun--almost any cliche you throw at it works, because this is the real deal. What you are witnessing here is nothing less than the genesis of an entire new solar system, taking place right before your eyes. For some quick context: Ever since Immanuel Kant introduced his nebular hypothesis in 1755, scientists have strongly suspected that planets form in swirling clouds around newborn stars. Over the years the theory has grown far more refined, filled in with supercomputer simulations and with increasingly detailed studies showing that young stars are surrounded by disks of gas and dust, closely matching what the models predict. But this new image, created by the ALMA observatory in Chile, is by far the best look ever at how planets are born. In this image we are peering down at a young star called HL Tauri, seeing high-frequency microwave radiation (technically known as millimeter and submillimeter waves) radiated by the star and by the disk surrounding it. Together they make a bullseye pattern, which appears oval because we are viewing it at an angle. The star itself is, naturally, at the center of the bullseye. But the really exciting thing is the missing parts of the picture--the bullseye's dark rings. These are places where something is sweeping up or disrupting the material in the disk. That "something" is almost certainly a family of growing planets. Count the rings and you are counting the planets: At least 8 of them taking shape, apparently, and undoubtedly there are many smaller things (equivalent to our comets and asteroids) zooming around unseen within the disk. Eight new worlds emerging into the universe. This is the first time in history that you and I can watch the process as it unfolds.

HL Tauri's disk is 3 times the diameter of our solar (shown on the same scale at right), but it seems to be forming 8 major planets--just like ours. (Credit: ALMA (ESO/NAOJ/NRAO) The ALMA studies of HL Tauri will add enormously to what we know about how planets form, about how Earth and the rest of our own solar system came to be, and about the long-lost early history of our world. They are already leading to new insights. HL Tauri is less than a million years old, extremely youthful even by the standards of stellar newborns. Current theories predict that planets should take several million years or more to pull together, but clearly the process can happen considerably more quickly than that. The implication is that planetary formation is a more efficient (and probably more common) phenomenon than astronomers thought. In a welcome act of coordinated timing, today the Hubble Space Telescope released a companion image of HL Tauri and its surroundings, this one covering a much larger area and showing what the star looks like in visible light. The disk and planets are far too small to see at this scale; instead, the Hubble picture shows the complex winds and jets of material that shoot off to great distances from HL Tauri and other nearby baby stars. Somehow, the planets are not disrupted by all that commotion, although the fast material flowing out from the star undoubtedly affects their composition and their evolution. Similar processes sculpted the Earth 4.5 billion years ago. In essence, we are looking through a time machine into our own past.

HL Tauri and two other nearby infant star systems, seen by the Hubble Space Telescope. The whole scene is about 450 light years from Earth. (Credit: ESA/Hubble/NASA, Judy Schmidt) I should add a final note about ALMA, since it is such an important new astronomical tool. Hubble, great as it is, has just a single set of optics and so is limited by what a single telescope can do. ALMA is an array of 66 antennas that can spread out over a distance as great as 15 kilometers. By combining data from the different antennas, ALMA can achieve a resolution 1,000 times better than Hubble's. The picture of HL Tauri is the sharpest one that ALMA has yet produced, but the array is still not operating at full capacity. In other words, even greater things lie ahead. Keep watching--and follow me on Twitter for the news as it happens.