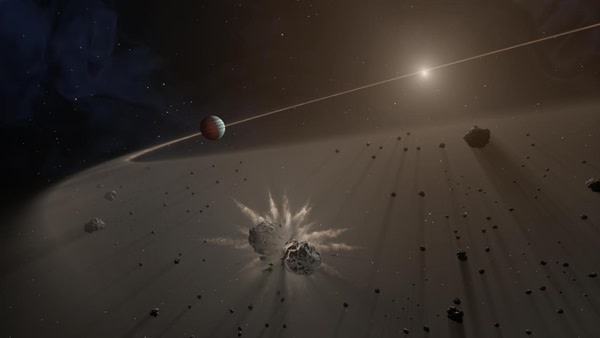 This artist's concept shows a debris disk surrounding a white dwarf. New research reveals the disk around white dwarf SDSS J122859.93+104032.9 harbors a small, intact planetary body that scientists think is a heavy metal piece of a destroyed planet's core. (Credit: NASA/JPL-Caltech) White dwarfs are weird objects. These dense cores of dead stars pack as much mass as the Sun into a body about the size of Earth. They're left behind when a small- to mid-sized star ends its life by ballooning into a red giant and blowing off its outer layers in a series of explosive pulses. Although these puffs of ejected material eventually create a beautiful and expansive cloud of glowing gas called a planetary nebula, the process unfortunately tends to wreak havoc on any planets residing nearby. Considering the Sun is destined to become a white dwarf in about 5 billion years, this scenario doesn't bode well for Earth. However, there's a growing dossier of evidence that suggests some planetary systems — including our own solar system — might be able to survive their host star's violent transition into a white dwarf. At least in part. In a new study published today in the journal Science, a team of researchers reported the discovery of one of the first small and intact planetary fragments (or planetesimals) found orbiting in the gas-filled debris disk of a white dwarf star. Because this strange object is composed of mainly iron, nickel, and other heavy metals, the researchers think it's most likely an ancient remnant that split from the core of a rocky planet similar to Earth or Mars. By studying such objects in other systems, researchers hope to eventually piece together the evolution and ultimate fate of our own solar system.

The planetesimal in question was detected through spectroscopic observations obtained with the world's largest single-aperture optical telescope: the 10.4-meter Gran Telescopio Canarias in Spain's Canary Islands. Though the size of the planetesimal is still uncertain, it has a diameter as large as about 450 miles (720 kilometers), lead author Christopher Manser of the University of Warwick told Astronomy. This would make the planetary remnant about three-quarters the size of dwarf planet Ceres. However, Manser points out the planetesimal could also be quite tiny, possibly as small as just 3 miles (5 km) across. 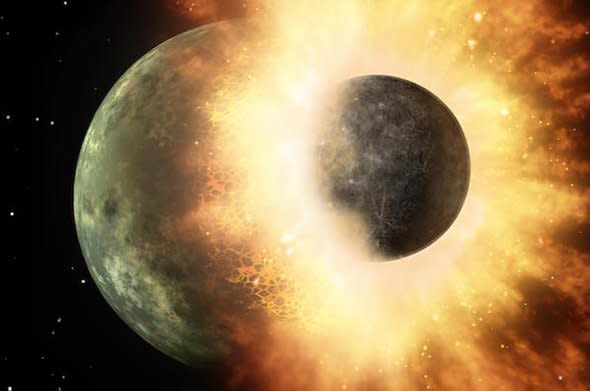 Recent research uncovered a small body orbiting very near a dead white dwarf star. Although the exact origins of the object are uncertain, based on the fact that it has remained intact, researchers think it might be a fragment from the metallic core of a terrestrial planet that experienced a dramatic collision in its past. Based on its expected properties and mass loss, the planetesimal is expected to survive another 1,400 to 14,000 years. (Credit: NASA/JPL-Caltech) No matter its size, the researchers say they're fairly certain the planetesimal is very dense — after all, the body must be relatively hardy if it can withstand the harsh gravitational forces near a white dwarf. According to Manser, although the object could potentially have a density as great as 39 g/cm3 (several times denser than Earth's inner core), they expect it to be closer to 7.7 g/cm3, which is more comparable to pure iron or the cores of rocky planets.

"We can confidently say that it is not going to be the core of a gas giant, as these should have a different composition," Manser says, "and the material we see that has been accreted by the white dwarf doesn't match the material you would expect to see from a gas giant's outer layers or core." Instead, the planetesimal likely originated deep within a rocky planet that was torn apart as its host star went from a normal star, to an inflated red giant, to a white dwarf. "In our own Solar System, when the Sun becomes a red giant, it will engulf Mercury, Venus, and most definitely the Earth," Manser says. But the planetesimal revealed in this research probably is "from farther out in the system, like an asteroid-belt analog or a planet orbiting farther away, that is then scattered toward the white dwarf." Based on the planetesimal's iron-loaded composition, Manser says it was either pushed toward the white dwarf through interactions with giant planets or a super-Earth and partially destroyed, or it was "broken apart in a planet-planet collision, producing a core-like asteroid similar to 16 Psyche in our own solar system," before migrating inward. The planetesimal spins about once every 40 minutes, and it orbits the white dwarf about once every two hours. With such a short orbital period, the researchers expect the planetesimal to sit very near its host star. In fact, according to the study, if the object was instead orbiting the Sun (which is roughly 100 times the diameter of the white dwarf), it would literally sit inside our star. Furthermore, the shape of the planetesimal's orbit seems to be more elongated (or eccentric) than the near-circular orbit of your average planet, though Manser points out further data is needed to confirm this eccentricity. Often, when an object has a highly eccentric orbit, it indicates a powerful past interaction kicked it from the round orbit it received when the object was first forming within a circular protoplanetary disk. So, if the eccentric orbit is confirmed, it could serve as further evidence for the planetesimal's violent past.

The white dwarf, named SDSS J122859.93+104032.9 (SDSS1228 for short), is currently about 70 percent the mass of the Sun and located some 410 light-years away in the constellation Virgo. SDSS1228 is especially notable because it's a member of an ultra-rare class of white dwarfs that host planetary disks made of both gas and dust. Though Manser says there are about 40 to 45 white dwarfs known to host disks solely made of dust, only seven (or 0.07 percent of all white dwarfs) have disks that also include gas. 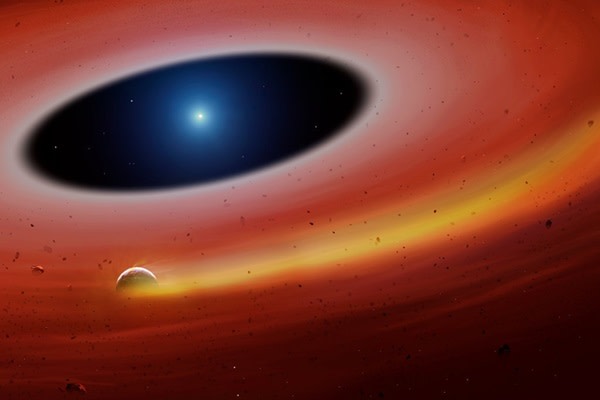 This artist's concept of the white dwarf SDSSJ1228 highlights the chaotic disk of dust and gas that surround the long-dead star. New research recently uncovered a planetesimal within this disk that is releasing gas as it orbits the star once every two hours. Based on the hardiness of the planetesimal, researchers think it is likely a heavy metal fragment from the core of a terrestrial planet. (Credit: Mark Garlick/University of Warwick) Although relatively few white dwarfs have disks, Manser explained that between 25 and 50 percent of known white dwarfs show signs of having consumed planetary material in their past. And before that material sinks below the white dwarf's surface, it would circle the dead star in the form of a dusty disk. So, although this might explain why dozens of white dwarfs have dusty disks, it doesn't explain why some have gas too.

"We are still uncertain why these disks that host gas are so rare," Manser said, "but we hypothesize that it is the presence of a planetesimal in the disc which is producing the gas that we see." It could be that gases are evaporating off the planetesimal's exposed surface, he says, or it could be that the planetesimal is acting like a wrecking ball as it barrels through material in SDSS1228's debris disk, releasing gases as it collides with dust particles. In order to learn more about the origins and evolution of planetesimals around gas-disk white dwarfs, Manser and his team are already planning to hunt for more examples. "There are six other known gas disks around white dwarfs," he says, "and there are a few that are bright enough to apply the method we developed here to search for additional planetesimals." So by bolstering our catalog of known planetesimals in aging planetary systems, we can begin to understand how our own planets will react when the Sun shuts down. "Discovering more planetesimals would teach us about the extreme conditions that planetary bodies — or their fragments — can survive in," Manser says, "as well as help our overall understanding of remnant planetary systems around white dwarfs. These systems are great tools to learn about the composition of exoplanetary material."

Get Psyched for Psyche

Although studying planetary remains around long-dead stars is informative, presently, there are not many locations where the methods presented here are effective. But fortunately, the solar system is likely harboring its own piece of a planetary core — 16 Psyche — which is ripe for exploration. This iron-nickel asteroid orbits between Mars and Jupiter (about where Manser and his team think their planetesimal started out) and was discovered by Italian astronomer Annibale de Gasparis in 1852, making it the 16th asteroid ever found. At some 125 miles (200 km) wide and composed of up to 95 percent metal, Psyche offers a unique natural laboratory where researchers can study an ancient planetary core that likely underwent a series of violent collisions in its past. 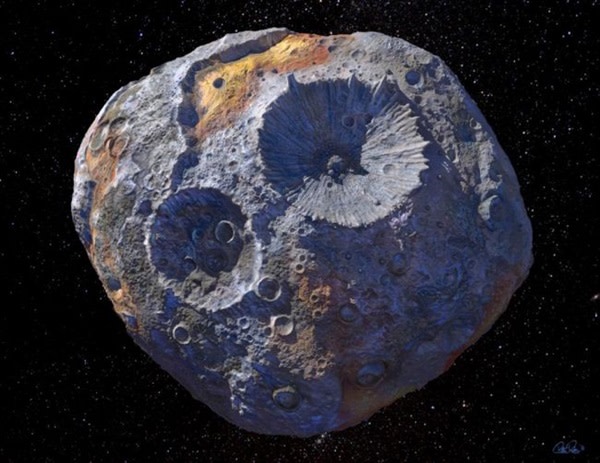 This artist's concept shows the heavy metal asteroid Psyche, which is thought the be a piece of an ancient protoplanet's core. An upcoming mission to Psyche hopes to reveal what conditions and materials were present when the terrestrial planets first formed. (Credit: NASA)

Because a detailed look at Psyche may likewise help us unravel the mysteries of planet formation and evolution, in 2017, NASA's Discovery Program finally approved a mission to the heavy metal remnant. Scheduled for launch in 2022, the Psyche mission aims to provide us with our first looks inside a former terrestrial planet's core by 2026.

Though we know a lot about Earth, keep in mind we cannot directly examine its assumed metallic core. According to NASA-JPL's Psyche mission webpage, "Because we cannot see or measure Earth's core directly, Psyche offer a unique window into the violent history of collisions and accretion that created terrestrial planets." By probing the early building blocks of the solar system (like Psyche), while simultaneously exploring planetary remnants around distant dead stars, researchers are working tirelessly to unravel both the origins and the ultimate fate of our solar system. But one thing already seems clear: Our cosmic home had a violent beginning, and it will surely face a violent end.