A panoply of moons and rings

Take four moons, some rings, a schoolbus-sized spacecraft, and mix them together. What do you get? Magnificence. 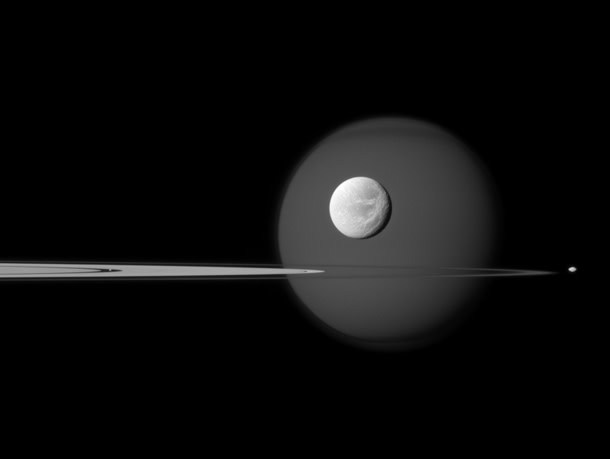 That stunning shot is from the Cassini spacecraft orbiting Saturn. The big moon is Titan, and by big, I mean bigger than the planet Mercury. Big enough to have a thick nitrogen atmosphere, clearly visible in this picture. The bright moon superposed right on top of Titan is Dione, its icy surface shiny and white. On the right, just outside the rings, is tiny, flying saucer-shaped Pandora. And the fourth moon? That's Pan, the tiny white spot in the gap in the rings on the left, barely visible in this shot. But that's understandable, since Pan is less than 30 km (18 miles) across, and this was taken from a distance of nearly 2 million kilometers (1.2 million miles) away! I love pictures like this; they remind me that even after 7 years of Cassini touring around Saturn, there's still much to see and much beauty to behold there. Image credit: NASA/JPL-Caltech/SSI

Related posts: - A trillion and five moons - Cassini's pentaverate - The bringer of fire, hiding in the rings - Cassini’s slant on the rings