A Love Letter to the Last Planet

Neptune really deserves more attention, if you ask me. 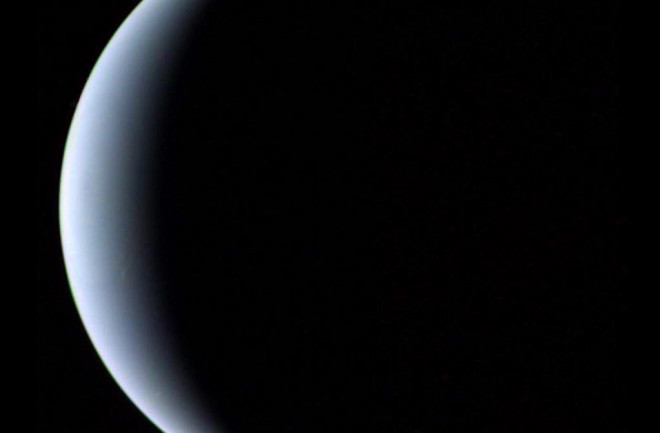 The crescent of Neptune and Triton, captured by Voyager 2 on August 25, 1989, as the spacecraft was fleeing from the planet toward interstellar space. (Credit: NASA-JPL)

Thirty years ago this week, the Voyager 2 spacecraft flew past Neptune, providing the first up-close look at the last planet in the solar system*. The anniversary tugged generously at my heart. You see, I fell in love with Neptune as a kid, back when I was in the second grade.

We all had to read about a planet and tell a few sentences about why we liked it. I got assigned Neptune. Neptune? Everybody wanted Saturn or Mars, or at least Jupiter. But as I read about Neptune, distant and dim, I got hooked. It was a planetary underdog, full of mysterious possibilities.

In August of 1989, when Voyager 2 started sending back the first clear pictures of Neptune and its moons, the mysteries began giving way to marvels. Neptune is a world of giant methane storms and strange rings. Its biggest moon, Triton, is a captured dwarf planet, Pluto’s hyperactive cousin. Since then, Neptune has only become more interesting. We know now that it holds big clues to the formation of our solar system, and to the nature of the planetary systems around other stars.

Let’s start with those storms. Before Voyager 2 arrived, scientists generally assumed that Neptune would be largely featureless and calm, since it receives so little heat energy from the Sun. Sure enough, temperatures at its cloudtops hover around -210 degrees C, but conditions there are anything but calm. Voyager found the planet wracked by storms, including an enormous cyclonic system called the Great Dark Spot.

Follow-up images by the Hubble telescope in 2018 revealed that the dark spot had vanished and been replaced by new giant storms. Neptune also has the fastest sustained wind speeds recorded anywhere in the solar system, more than 2,000 kilometers per hour.

The exact mechanisms driving all this activity are poorly understood, though they certainly have a lot to do with the significant internal heat leaking out of the planet: It radiates 2.6 times as much energy as it receives from the Sun. This extra thermal energy must be left over from the time of its formation. (Adding an extra twist of confusion, Uranus does not have the same kind of internal heat flow, even though Uranus and Neptune are almost identical in size and composition.)

More marvels are lurking beneath those clouds. Much of Neptune’s interior consists of a mix of water, ammonia, and methane that is about 17,000 kilometers deep. Planetary scientists collectively call these compounds “ices,” and therefore commonly refer to Neptune and its near-twin, Uranus, as ice giants. The ice inside Neptune is not like any ice you’ve ever seen, however.

At the crushing pressures deep inside Neptune, the “ice” is heated to temperature of thousands of degrees: ice that is hotter than lava. Under such extreme conditions, water transforms into a bizarre crystal known as “superionic ice,” which is black, dense, and electrically conductive. Superionic ice fills much of the interior of Neptune and, presumably, other Neptune-size planets around other stars. Superionic ice may, in fact, be the most common form of water in the universe.

The vast layers of electrically conductive ice inside Neptune may explain why it has such a weird magnetic field. As superionic ice slowly churns inside the planet, it could move electric currents that generate the field. Unlike Earth’s field, which is centered on the core of the planet and aligned with its axis of rotation, Neptune’s field is highly angled and significantly offset; apparently it is generated in an unstable middle layer halfway to the surface.

Something else even more wondrous happens in those deep layers of superionic ice. Carbon atoms get squeezed out of the methane molecules mixed in with the water, creating clumps of crystallized carbon. You probably know crystallized carbon by its more common name, diamond. According to laboratory simulations, the diamonds inside Neptune could have grown to be a meter wide. They are denser than the surrounding ices, so they sink downward toward the planet’s core.

That’s right: Inside Neptune, it is raining meter-wide diamonds.

The rings of Neptune are so faint that the planet had to be blotted out to make them visible. The bright arcs are hidden behind the planet in this Voyager 2 image. (Credit: NASA-JPL)

A diamond deserves a ring, and Neptune has several of them — five of them, in fact. Unlike Saturn’s rings, these are thin, dark structures around the planet, too dim to be observed clearly from Earth. It took Voyager 2’s camera to get a proper view of them. They probably formed from the fragmentation of a small moon. The rings are narrow, similar to the rings of Uranus; the outermost ring is 120,000 kilometers in diameter but less than 5,000 kilometers thick.

Unlike any other system, Neptune’s rings are very clumpy, concentrated into dense arcs. Why this happens, and what holds them together into their stable, narrow structures, is still unknown.

Beyond the rings, Neptune has a system of 14 known moons, six of them discovered by Voyager 2. The standout in this set is the giant moon Triton, which has a diameter of 2,710 kilometers, making it just slightly smaller than Earth’s Moon. Triton is an oddball in many ways. It orbits Neptune backward (clockwise as seen from above the north pole), unlike every other moon in the solar system. Its orbit is also oddly inclined, tilted 30 degrees relative to Neptune’s equator.

The strong circumstantial evidence is that Triton is a captured dwarf planet that originated in the Kuiper Belt just beyond Neptune, and then wrecked most of Neptune’s original moons when it arrived. That would make Triton a close relative to Pluto, and sure enough the recent images of Pluto taken by the New Horizons spacecraft resemble Voyager 2’s views of Triton. But Triton differs in some intriguing ways. For one, it is about 15 percent larger than Pluto, making it the largest known Kuiper Belt Object.

Triton is also geologically active. When Voyager 2 flew by, it observed a field of nitrogen geysers blowing plumes of dust up to 8 kilometers high. Winds in Triton’s extremely thin atmosphere blew the plumes into long streaks. The surface appears young and crater-free, suggesting that Triton has weather systems, glaciers, and perhaps ice volcanoes that constantly reshape the landscape. Perhaps it was once even more like Pluto, before it got stressed and distorted by its proximity to Neptune.

So yeah, my adult self agrees with my 8-year-old self that Neptune is a fascinating place. Voyager 2 gave us only a taste of what it’s really all about. And Neptune is just the prototype of a whole class of Neptune-size planets that appear to be common around other stars. Recent studies indicate that our own solar system probably contained additional Neptunes early on, but at least one of them was ejected while another may have crashed into Jupiter.

A new mission to Neptune would go a long way toward unraveling the planet’s mysteries, and starting to understand the tremendous community of other Neptunes out there. I’m not the only one advocating for a Neptune mission, but of course these things depend on funding, which in turn depends on public support. To me, a return visit to the planet that can ignite a child’s sense of wonder is money well spent.

* Neptune is the last of the known planets, at least. Planet 9 may be out there somewhere, but I’ll believe it when I see it. And whatever you want to call Pluto, it is in a different category — more akin to Triton than to Neptune.