Scholars have no direct evidence of this ancient site in Babylon. Speculations vary about where it was located, how it looked and whether it actually existed among the seven wonders of the world. 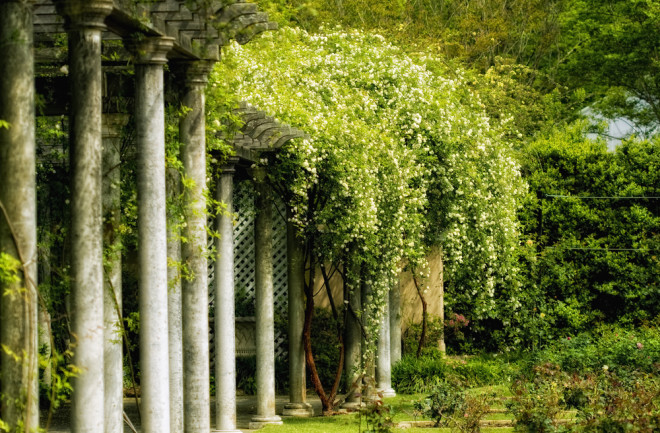 Of the original Seven Wonders of the World, only one still survives today: the Great Pyramid of Giza in Egypt. The other six have all been destroyed since the 2nd century B.C.

Ruins of the Temple of Artemis can still be seen in Turkey today. Most, or parts, of the Lighthouse of Alexandria and the Mausoleum at Halicarnassus survived for more than a millennium after the initial list of the seven wonders began to circulate. Otherwise, a number of relatively accurate drawings and depictions exist for many of the wonders, as a result.

But the most mysterious of the seven ancient wonders is the Hanging Gardens of Babylon, rumored to have existed some 2,500 years ago. No preserved Babylonian writings from that time mention the gardens. Scholars today only speculate where they existed, and how they might have appeared, based on historians who later quoted eyewitness accounts.

Some researchers are torn on whether they were located in the city of Babylon itself or Nineveh, an ancient Assyrian city. Others question the very existence of the world wonder, believing it might have only existed in the fanciful imaginations of Greek writers.

The most popular story about the Hanging Gardens involves the famous Babylonian, King Nebuchadnezzar II, and his queen Amytis, who moved from the country of Media situated more or less in modern-day Azerbaijan and Kurdistan.

Because Babylon was a generally arid place, the queen supposedly missed the gardens and greenery of her homeland. One of the oldest mentions of the gardens is attributed to the 3rd century B.C. Babylonian priest Berossus. Original writings from Berossus haven’t survived, but Laurie Pearce, an Assyriologist at the University of California, Berkeley, says that his works were quoted by Greek historians after his move to Kos, an island off the coast of Turkey in modern-day Greece.

One of his readers was the 1st century Roman historian Flavius Josephus, who quoted Berossus talking about Babylon having walls with a “pensile,” or hanging, paradise with plenty of different species of trees: “[Nebuchadnezzar] rendered the prospect an exact resemblance of a mountainous country. This he did to gratify his queen, because she had been brought up in Media, and was fond of a mountainous situation,” Josephus quotes from Berossus in his Against Apion.

While the story sounds nice, Josephus’ description is one of the only quasi-credible accounts we have that mentions Nebuchadnezzar at all. Some of the other oldest descriptions of the gardens mention they were built by a Syrian king, but none elaborate on how or why it started.

“The other descriptions just talk about what the gardens looked like,” Pearce says.

Diodorus’ description involved several terraces with vaults — think of a kind of ancient parking garage built roughly in the shape of a pyramid, or ziggurat, using the parlance of the times. Water was taken from the river, possibly using pumps.

Strabo, a Greek geographer born in the 1st century B.C., may also have been relying on earlier writings and hearsay when he described in Babylon vaulted terraces with hollow, cube-shaped pillars filled with soil to hold the roots of larger trees. You could climb the terraces by stairs that had water engines alongside, bringing water up from the Euphrates. The whole thing “was a quadrangular pyramid of baked brick, a stadium in height, and each of the sides a stadium in length,” he writes in his Geography.

If the Josephus account is accurate, the gardens themselves may have been built along one of the palace walls. “There are places where the walls are six meters thick,” Pearce says.

It’s hard to know what kind of plants might have been in these gardens other than that they had various types of trees, as mentioned in the Josephus account. But Pearce says that one surviving list of plants that likely appeared in the gardens of Babylonian kings included things like garlic, onion, fenugreek, coriander, dill and other herbs. It’s also possible, she says, that trees included cedars and other things found in the larger region.

The truth is, we really don’t know what the Hanging Gardens might have looked like, given the fragmented nature of the historical record.

The lack of any solid archaeological evidence has led some scholars to believe that the gardens didn’t exist at all, that they were merely a figment of ancient Greek minds and lore. But some scholars are dismissive of this take.

“That’s a pretty stupid copout really,” says Stephanie Dalley, an Assyriologist the University of Oxford. “It doesn’t make sense to say we couldn’t find it, so it didn’t exist.”

One piece of potential evidence for this comes from Diodorus. He wrote that the gardens were built by Semiramis, a legendary Assyrian queen. The historical Assyrian queen from whom Semiramis’ name is adapted likely wouldn’t have built things in Babylon, Pearce notes.

While the very existence of Semiramis is debated, the Assyrian king Sennacherib, who ruled starting in 704 B.C., had extensive gardens at his palace in Nineveh and the engineering to irrigate them, historical documents show. One surviving carving from a palace at Nineveh depicts gardens and a canal. Sennacherib’s grandson Ashurbanipal also kept a zoo with animals brought from around the empire.

Nonetheless, Pearce isn’t fully convinced the gardens were at Nineveh. Nineveh was destroyed by a coalition of Babylonian and Median forces in 612 B.C., she says. It’s possible that the gardens were still there in some form if that theory is correct, but they wouldn’t have been maintained anymore beyond that point.

There were miles of walls built around the city of Babylon, if not the palace, and many of them are large enough that they could have supported the kind of terracing many ancient historians mentioned.

“It’s not unlikely that they were there,” Pearce says.

With no certainty about the location, of course it's unclear when the gardens were destroyed, and by whom. But Strabo's ancient account describes gardens that were in ruins by the end of the 1st century B.C. His writings suggests that Alexander the Great wanted to repair the Hanging Gardens, but died before he could execute the plan.

“None of the persons who succeeded [Alexander] attended to this undertaking,” Strabo wrote.

Since then, the window of opportunity to find the Hanging Gardens may have closed. Because the course of the Euphrates River has shifted in the thousands of years after Alexander, it's possible any surviving ruins now lie underwater, Pearce says.