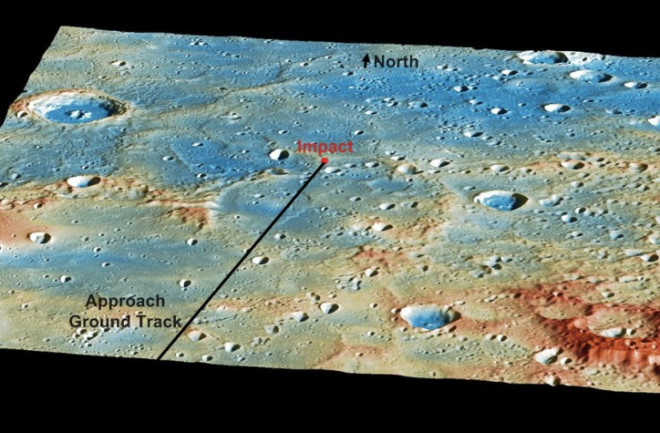 Final resting place of the Messenger probe on Mercury, where it crash landed on April 30 while traveling at 8,700 miles per hour. Credit: NASA/APL/CIW Through most of its life, NASA's scrappy Messenger probe was something of a unsung hero. The first spacecraft ever to orbit Mercury didn't have the you-are-there immediacy of a Mars rover, the daredevil appeal of landing on a comet, or the romance of visiting a beautiful ringed planet. But with today's death--the result of a long-anticipated crash into the planet it studied--we can clearly see what an incredibly successful explorer Messenger was. Mercury has long been a solar-system enigma. It is not particularly small (roughly halfway in size between Mars and the moon), and it is not particularly far away (third closest planet to Earth after Mars and Venus), but the first planet from the sun is devilishly hard to study. Seen from Earth it hangs low in the sky; from space it hugs so close to the solar glare that the Hubble telescope cannot aim at it. Astronomers were so stymied that they didn't even know how quickly Mercury rotated until 1965, when they found out, not by looking but by bouncing radar signals off its surface. Getting Messenger to Mercury wasn't easy, either. After the 2004 launch, it took nearly 7 years of flight--including one Earth flyby, two Venus flybys, and three passes by Mercury--before the probe was able to enter orbit. Compare that to the 9-month travel time to Mars. The obstacle, once again, is the sun: Its gravitational pull tends to speed up any inward-traveling space probe, but getting into orbit requires a slow approach, making for a tricky maneuver. When Messenger finally arrived for good on March 18, 2011, it encountered a planet that we barely understood. That quickly changed. Within two years, Messenger mapped the full surface of Mercury, half of which had never been seen before. As Mercury came into sharp focus for the first time, scientists have begun to appreciate the truly wonderful, exotic strangeness of the innermost planet. [

South pole of Mercury is color-coded to show how much sunshine each location receives. The dark, permanently shadowed crater bottoms are layered with icy deposits (shown in white). Credit: NASA/APL/CIW Mercury is covered with ice. Yes, the planet closest to the sun seems to be dotted with icy patches. It's not as paradoxical as it sounds. Mercury's axis points straight up and down, meaning that any deep craters near the north or south poles remain perpetually in shadow, in deep freeze. Messenger observations indicate that those craters contain up to a trillion tons of water ice, and appear to be coated in a blanket of organic (carbon-rich) compounds as well. Most likely the deposits consist of material that accumulated from billions of years of comet impacts. A much more intense version of that process may have helped fill Earth's oceans and seeded our newborn planet with organic molecules that could have aided the origin of life.

Mercury (left) is distinctly less reflective than the moon, perhaps because it is dusted with the sooty remains of dead comets. Credit: NASA/APL/CIW Mercury is painted black. A longstanding enigma about Mercury is that it is very dark, only about half as reflective as the moon. One new theory is that the rain of comets onto Mercury coated the planet with carbon--soot in essence--which would explain the odd surface coloration captured so dramatically by Messenger's cameras.

Debris from Comet Encke seems to cause seasonal meteor showers on Mercury. This artist's concept incorporates a real Messenger image of the planet. Credit: NASA. Mercury has meteor showers. The abundant craters and comet debris attest to billions of years of battering, but the bombardment has hardly ended. Thin clouds of calcium atoms periodically appear around the planet. A leading theory is that this strange chemical pattern is caused by a meteor shower that is too faint to observe directly. Those meteors may be bits of Comet Encke, which also causes the Taurid meteor showers on Earth.

Enhanced-color Messenger image shows the bizarre "hollows" found around impact sites on Mercury, such as this impact basin called Raditladi . Credit: NASA/APL/CIW Mercury is young and restless. Many of the geologic features seen on Mercury are unlike anything seen elsewhere. One of the most peculiar is a scattered set of pitted regions, dubbed hollows, where chunks of the surface appears to be missing. These may be places where deposits of easily vaporized materials--such as potassium, chlorine, and sulfur--were exposed to solar heat by asteroid impacts, boiling away and leaving voids that then collapsed. The abundance of such "volatile" materials on Mercury was unexpected. Even more surprising, the hollows appear extremely recent, and may still be forming today.

Mercury's sodium atmosphere was detected by the spectrometers aboard Messenger; this data visualization shows how the sun sweeps Mercury's atmosphere into a tail. Credit: NASA/APL/CIW Mercury has a tail like a comet. Intense radiation from the nearby sun (just 36 million miles away, on average) boils sodium and calcium atoms out of Mercury's surface, creating an extremely thin atmosphere. Sunlight pressure and the solar wind then blows some of that atmosphere outward, creating a long, flowing tail. To someone standing on Mercury's night side, the illuminated tail of sodium atoms would give off a dim orange glow, analogous to the light from a sodium vapor street light.

A 400-mile-long cliff on Mercury, called Beagle Rupes, cuts across the desolate landscape. It is part of an enormous vertical fault that formed as the planet cooled and shrank, triggering mighty quakes. Credit: NASA/APL/CIW Mercury is shrinking. Despite its searing surface--up to 800 degrees Fahrenheit during the day--Mercury is losing heat. Messenger observations show the dramatic consequences of that cooling: The whole planet is shriveling like a raisin, folding the surface into a network of cliffs called lobate scarps. The biggest of those scarps are two miles high and 1,000 miles long. Mercury's diameter today is 8 miles less than it was when the planet formed, scientists estimate. Such cooling and wrinkling will eventually happen to Earth as well, but not for billions of years because of our planet's much greater bulk.

Mercury may be a lot smaller than Earth, but it packs a mean iron punch: Its huge 3-layer metallic core, unique in the solar system, makes the planet exceptionally dense. Credit: Case Western Reserve Mercury has an iron heart. Scientists have long known that the planet is oddly massive for its size. Messenger has clarified the reason why: Mercury has a huge, dense iron core, 85 percent the size of the planet as a whole. In essence, it is an iron ball wrapped in a thin veneer of rock. The middle part of the core is molten and dynamic, giving rise to a strong magnetic field. As for how the planet got that way...nobody knows. Perhaps an early giant impact ripped away most of its rocky outer layers, but the prevalence of easily boiled elements like sulfur argue against such a violent process. The correct answer will tell us a lot about how Earth and the other inner planets formed, but even Messenger hasn't been able to solve this puzzle. Hey, at least the spacecraft left some work for future visitors. Humans will be back in 2024, when the joint European-Japanese BepiColombo mission sets up camp around Mercury. Until then, an archive of more than 270,00 Messenger images and a trove of data will keep researchers plenty busy.