Supernova 1987A was temporarily visible to the naked eye just a few decades ago. But ancient astronomers also witnessed a number of these "guest stars" pop up in our night sky. 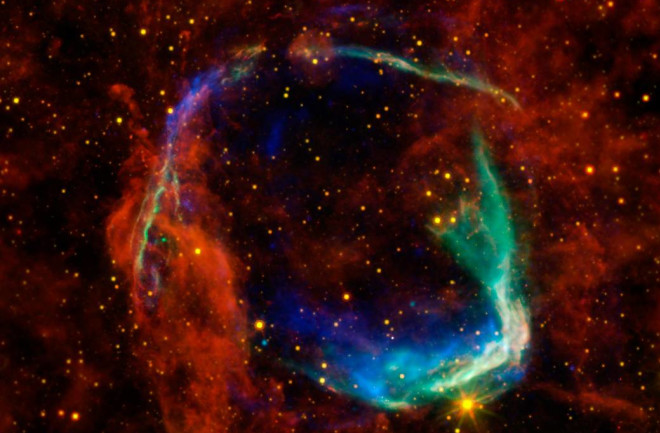 In 185 A.D., Chinese astronomers saw a strange "guest star" suddenly appear in the night sky. It was visible for a staggering eight months. That was enough time for ancient skywatchers to take notice and make the first-known observation of a supernova in human history. There’s also some evidence that Roman astronomers witnessed the event.

In modern times, astronomers have rediscovered the remains of this dead star. Their studies have revealed that Supernova RCW 86 happened after a neighboring star offloaded huge amounts of its own matter onto a white dwarf, which is essentially a stellar corpse. This led to what astronomers call a Type Ia supernova that exploded some 8,000 light-years from Earth.

Above, combined X-ray images from NASA's Chandra X-ray Observatory and the European Space Agency's XMM-Newton Observatory show how a shockwave heated the interstellar gas to millions of degrees.

For months, the supernova of 393 A.D., now cataloged as G347.3-0.5, was visible shining in Earth’s night sky. Astronomers estimate it would have appeared as bright as Jupiter, the largest planet in our solar system.

There’s also evidence that G347.3-0.5 was witnessed and recorded by Chinese astronomers, who were prolific in their chronicling of Earth’s night sky. A number of Chinese historical texts also reference meteors that killed people in ancient times.

If amateur astronomers had access to a time machine, the year 1006 A.D. would be a strong contender for the best time to stargaze in human history. In late April, a staggeringly bright “guest star” exploded into Earth’s skies in the constellation Lupus.

SN 1006 would have been around 16 times brighter than Venus, typically the brightest object in Earth’s night sky besides the Moon, according to NASA. It ultimately reached an estimated visual magnitude of -7.5 — bright enough to be visible during the day.

All around the world, people would have taken notice. And there's evidence for the event captured in historical records from China, Japan, Iraq, Egypt, Europe, and even possibly North America. Some astronomers suggest rock art found at Arizona's White Tanks Regional Park could depict the appearance of this new "star."

On July 4, 1054 A.D., all of Earth was treated to celestial fireworks as a new star appeared in the constellation Taurus the Bull. The supernova — initially brighter than the Moon — slowly faded away over the course of two years.

Many ancient cultures around the world likely saw the bright object. Some of the most intriguing possible recordings are found in petroglyphs at Chaco Canyon National Park in New Mexico and the surrounding region. Some astronomers suspect this rock art depicts the supernova, thought other researchers have questioned that idea.

Chinese and Japanese astronomers are both thought to have witnessed Supernova 3C58 in the year 1181 A.D. Like other historical accounts, they record it as a “guest star.”

Modern imaging of this supernova, like the above image captured by NASA’s orbiting Chandra X-ray Observatory, have revealed incredible details about what was left behind after this star exploded.

Supernova 3C58 holds a rapidly spinning neutron star — called a pulsar — that’s surrounded by a thick ring. The pulsar still shoots out jets of X-rays that extend for trillions of miles and create loops and swirls around the incredibly magnetic dead star.

When SN 1572 appeared in Earth’s night sky back in 1572 A.D., the bright new star shone proudly in the constellation Cassiopeia. Danish astronomer Tycho Brahe took note as he worked on his epic effort to map and measure the heavens in a time before the invention of the telescope.

Brahe’s findings suggested that the new star sat past the Moon. According to NASA, it was an important bit of evidence during a time when Nicolaus Copernicus’ ideas that Earth wasn’t the center of the universe — and that the universe changed — were rocking the public consciousness.

The supernova of 1604 takes its name from astronomer and mathematician Johannes Kepler. After the new star appeared in Earth’s night sky, he kept an eye on it for roughly a year.

However, the supernova was also noted in China and other places around the world, as it was visible even in the daytime. Even today, astronomers are still studying this striking supernova remnant.

And although Betelgeuse may take hundreds of thousands of years to explode and light up Earth's sky, another ticking stellar time bomb could beat it to the punch.