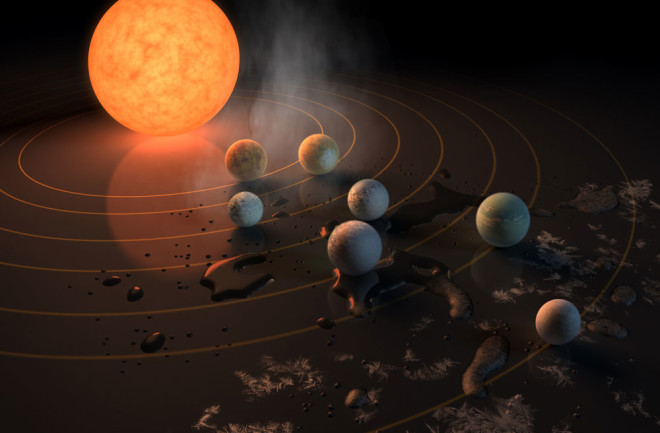 (Credit: NASA/JPL-Caltech)TRAPPIST-1 has a solar system like no other. The tiny, tiny red dwarf is just barely big enough to be considered a star, and is, radius-wise, a hair bigger than Jupiter. When it was announced last May, there was some excitement: the system had three Earth-sized planets, and they might all be habitable.

We’re going to have to revise that, though. It has seven planets. The results of an intensive study were published today in Nature.

TRAPPIST-1 is so small that it resembles Jupiter and its planets appear more like the jovian moons when laid out, distance-wise. TRAPPIST-1b has an orbital period of just 1.5 days and orbits at 1 percent the distance between the Sun and the Earth. Because TRAPPIST-1 is so small, though, instead of dooming the planet, it could give it just a slightly balmier-than-comfortable temperature.

The May 2016 events that led to the initial discovery of the planets actually ended up being somewhat in error. Planets TRAPPIST-1b and TRAPPIST-1c were easily confirmed, but TRAPPIST-1d was not. TRAPPIST-1d had a bizarre, hard-to-constrain orbit much longer than the other planets. “The first transit and the second transit were coming from different planets,” Michaël Gillon, a professor at the University of Leige and lead author of the paper, says. “In fact, the second transit was two planets passing at the same time.”

What the planets in the TRAPPIST-1 system might look like. (Credit: NASA/JPL-CALTECH)Like No OtherIntensive studies using both the TRAPPIST telescope and NASA’s Spitzer telescope helped refine the orbit of the planets and drew out the presence of two more from the data. TRAPPIST-1b, -1c, -1f, and -1g are all very slightly larger than Earth; -1e is slightly smaller than Earth; -1d and -1h are closer to Mars in size. While the exact masses and orbital periods aren’t known yet, preliminary results suggest that they may be in resonance. That means that when -1b orbits eight times, -1c completes five orbits, often marked as 8:5. -1c and -1d are in 5:3 resonance; -1d and -1e are in 3:2, as are -1e and -1f. -1f and -1g are in 4:3.

All of them seem to be in the habitable zone of TRAPPIST-1. That means that they could, under the right conditions, sustain surface water, but there’s no proof that any of the planets do. For instance, in our solar system, Venus and Mars are in the habitable zone, but both are fairly inhospitable. Of the seven, the researchers believe that -1e, -1f, and -1g are the likeliest to be habitable based on where they sit in the solar system. While seven planets have been confirmed, that’s not all the system may hold in store. “It is just the beginning for many reasons — there might be more on top of that,” Julien de Wit, a co-author on the paper, says. Slow Your Roll There are other considerations before we declare the planets quite ripe for life, though. M-dwarf stars like TRAPPIST-1 tend to start out very active, with high energy flare events. This could strip away the atmosphere of young planets. At this point, according to co-author Emmanuël Jehin, most comets would have been cleared out of the system and thus unable to replenish the atmospheres. But other forces like volcanism could work to stabilize the atmospheres, strengthening them against the relentless flare events.

M-dwarfs, after the first 3 billion years or so, finally settle down, though many stellar events still occur. For instance, Proxima Centauri is an active flare star, which could doom its habitable zone planet, Proxima Centauri b, from ever forming complex life. But TRAPPIST-1 is cooler and less active than Proxima.“If you compare it Proxima Centauri, it’s much less, but if you compare it to the Sun, it’s much more,” Gillon says. TRAPPIST-1 and its seven planets are high on the list of planets to be observed by the James Webb Space Telescope (JWST) after it launches next year. A follow-up telescope to TRAPPIST, SPECULOOS, will be able to find more TRAPPIST-type objects. TRAPPIST itself only looked at 50 ultracool stars for planets, while SPECULOOS will look at tens of thousands. JWST will monitor transits of worlds in the TRAPPIST stars, hoping to capture a glimmer of their atmospheres. If they seem to be thin and water-dominated, we may indeed be looking at a quite Earth-like planet. Or even three of them. Maybe, just maybe, seven. “We have seven targets that we can study in great depth, and they can give us a completely new insight into planet formation and stellar history,” de Wit says. This article originally appeared in