6 Instruments Made From Unusual Materials Like President Madison's Crystal Flute

A lively Lizzo performance called attention to historical instruments constructed out of crystal, but crystal isn’t the only odd material for making music. 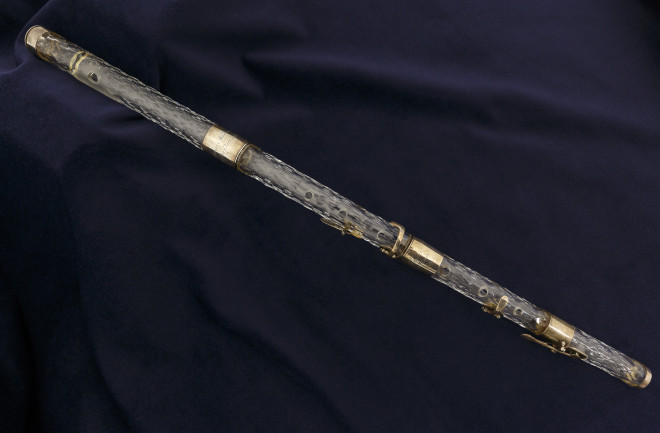 After touring the U.S. Library of Congress’s vast collection of artisan and antique flutes, popular vocalist and formally trained flautist Lizzo played an over 200-year-old crystal flute. The instrument was crafted for President James Madison.

Made for Madison's second inauguration in the 1810s, the flute features intricate carvings and shiny silver fastenings. It isn’t known if the president played the particular instrument, but it is fully functional. In fact, Claude Laurent — the French craftsman that originally constructed the translucent music-maker — thought that glass and crystal preserved pitch and tone much more than wood, the more common material of flutes from the time.

Though Laurent's experimental flutes found popularity for several years, fewer than 200 of the craftsman's glass instruments, and far fewer crystal creations, survive to this day. The instruments testify to the innovation involved in music making, and they stress that artisans have used an astonishing variety of materials to produce song throughout history.

Here are six other historical instruments made from strange and surprising materials.

As it turns out, innovation in the construction of flutes goes beyond crystal. More than 50 years prior to the inaugural flute, a German artisan named Georg Heinrich Scherer crafted this particular instrument from the twisting tusk of a narwhal. Thought to possess strange supernatural powers, artisans at that time treated these tusks as a precious material more valuable than gold.

The flute is only one of three identified wind instruments that were made from a narwhal tusk, and it was created for Frederick the Great of Prussia in the 1750s. A well-known patron of the arts, Frederick amassed a small collection of precious and peculiar flutes and systematically assessed their materials for their various tones and timbres.

During the 1,000 years between the Han and the Tang Dynasties in China, many Buddhist monks played long, pipe-like instruments called dung-chen to call people to prayer and to adorn their preludes and processions. For these purposes, these instruments tended to lack ornamentation and could collapse into several small pieces for storage and travel.

Manufactured during the Ming Dynasty between the 1300s and the 1600s, these two dung-chen trombones were cloaked in cloisonné. To create these instruments, the best artisans in China positioned bits of colored glass and cut gemstones into the shapes of flowers and dragons, securing them between strips of shining brass. Commissioned by the court, these impressive instruments were probably passed along to the courtiers of nearby nations.

Though most cellos are made out of wood, this particular instrument is crafted from several meticulously shaped sheets of iron. Secured together with welded seams, the only wood in this cello is its soundpost (which serves as structural support inside the instrument) and its bridge (which supports strings made of animal innards, nylon, silver and steel). The English blacksmith Thomas Barker made the instrument in 1830, and several musicians played it in concert in the early 1900s.

Common in the courts of India throughout the 1800s, the taūs is a bowed instrument that shares similar features to the sitar, save for its special peacock shape. The instrument's name is taken from the Persian term for the bird, and its silhouette is intended to invoke Sarasvatî, the Hindu goddess of art and song who was commonly associated with the flashy, feathered animals. That said, these instruments didn't always just portray peacocks. Some were made with the feathers and the beaks of actual birds.

Using tusks and beaks for instrument materials wasn't unique to just the animal kingdom. Tibetan Buddhists once thought that instruments made of human bones acted as powerful tools of protection and introspection.

The main material in this instrument, a trumpet known as a kangling, is a human thigh bone, probably from the 1800s. Like most kangling trumpets, this artifact lacked significant decoration and was likely involved in rituals centered on the impermanence of life. One ritual named Chöd, used sharp sounds of the kangling to shatter people’s attachments to the physical world.

Some instruments are involved in rituals, and some are simply intended to surprise. One lyre-like instrument from Central Africa features a resonator fashioned from an actual human skull. Some specialists say that this instrument may possess a ceremonial purpose. But the majority of scholars who've worked with the artifact assume it was made by an indigenous artisan in the 1800s as a purely sensational item to be traded and sold to European travelers.