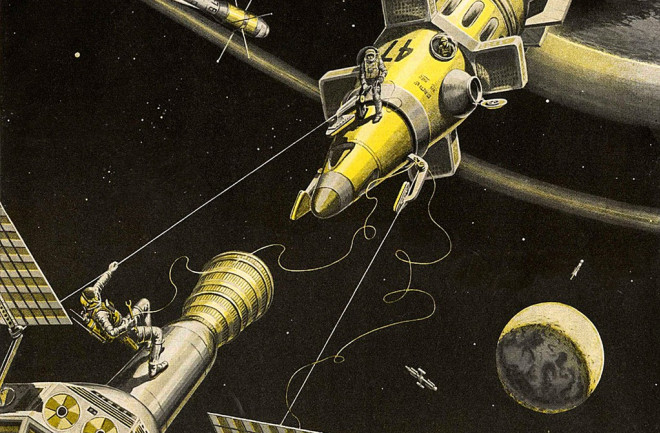 Frank Tinsley's vision for what it would take to rope in a satellite in space. (Credit: American Bosch Arma/Frank Tinsley) The space race officially started in 1957 when the USSR launched Sputnik 1 into orbit around the Earth. This demonstration of technological prowess during the Cold War spurred US leaders in 1958 to transform the National Advisory Committee on Aeronautics into the agency we’re all familiar with: NASA. The newly minted agency needed to work quickly to reclaim the nation’s technological supremacy. NASA’s budget was increased to hire of the best scientists and engineers that money could buy. But NASA wasn’t the only red-white-and-blue pony running in the space race. Private companies in the Land of Liberty were motivated to research, design and sell their cutting-edge technology to NASA for its future space missions. The private sector had big, bold plans to turn the US into a space-faring nation — perhaps too big. To market their ambitions, companies often turned to famed 1950s science fiction illustrator Frank Tinsley to visualize their concepts. Some of these exciting ideas came to fruition — in a scaled-down form. However, most were left to live and die in the magazine pages where they were printed to build buzz. The concepts for many of these missions were certainly out of this world. Unfortunately, that’s the one thing they also failed to ever do. Here’s a look at some of the more notable missions that failed to launch.

The Atomic Pulse Rocket (Credit: American Bosch Arma/Frank Tinsley) The Atomic Pulse Rocket wasn’t your typical cargo transport ship. It was the size of the Empire State Building, and was designed to ferry cargo from Earth to the moon. There was one, rather glaring, design flaw that kept the project grounded: It was to be propelled by a series of 1,000 atomic blasts. Each bomb would be held and fired from a low velocity gun into a rocket engine, detonating one bomb every second until the ship was propelled through Earth's atmosphere. From there, steam and the vaporized steel from the engine would maintain a constant thrust while it was en route to the moon. The Atomic Pulse Rocket was born out of the Manhattan Project and then advertised by artist Frank Tinsley and the ARMA Corporation in 1960. For a rocket loaded to the gills with atomic weaponry, it was actually designed to get passengers to their destination in relative comfort and safety. The proposed rocket contained a living space station that could hold a large crew or passengers traveling from Earth. A circular module encompassing the tip would spin to generate artificial gravity. The plans also included an advanced hydroponic system inside of the module for growing algae and other plants to produce oxygen and food. Even if the Atomic Pulse Rocket got to the point of accepting its first passengers, it would have taken an awfully strong marketing campaign to convince customers to strap in atop a stockpile of the most devastating weaponry known to mankind

The Cosmic Butterfly (Credit: American Bosch Arma/Frank Tinsley) The Cosmic Butterfly could have been the cruise ship for the stars. The ship’s design was an adaptation of a previous concept envisioned by Ernst Stulinger in 1954. The Cosmic Butterfly would have relied on a combination propulsion system that used both solar and ion propulsion. This gigantic floating spaceship was conceived to transport tourists and scientists from Earth to the moon and Mars. It had enough room to carry ten passengers on board but it never landed. Instead, the Butterfly would just float and let passengers off at their destination in a smaller vessel that would touch down on the surface. Stuhlinger estimated the Cosmic Butterfly would take about a year to travel from Earth to Mars, carrying passengers and 50 tons of cargo in tow. More than 50 years ago, ion propulsion was too risky and not enough was known to develop the technology. Today, NASA and other space agencies rely on ion propulsion as an efficient and lower cost method to send spacecraft deep into space. Most recently, an ion engine propelled NASA’s Dawn spacecraft to the dwarf planet Ceres. Some scientists argue that the future of robotic space travel is in the utilization of ion propulsion technologies.

The Mars Snooper (Credit: American Bosch Arma, 1960/Frank Tinsley) Long before the dawn of spaceflight, humans were already dreaming about visiting the Red Planet. Just two years after the launch of Sputnik, those dreams seemed closer to reality. Engineering companies in the US flooded the market with designs for a craft that could carry humans to Mars. Nuclear powered propulsion was the trendy design during the time, and the Mars Snooper was no exception. The 1959 Mars Snooper design relied on a similar propulsion system as two other military projects — a series of atomic blasts. However, as missions like the Mars Snooper were researched, the military realized that they couldn’t find a realistic application for this atomic propulsion, and soon after congress defunded all atomic research for space-related missions. The Mars Snooper would have capitalized on the close proximity of Mars’ moons Phobos and Deimos. It was designed to carry supplies and passengers from Earth to a station on Deimos. From there, it would head down to the surface of Mars. This plan might seem far-fetched, but just last year The Planetary Society held a workshop called “Humans Orbiting Mars” that laid out a similar plan as an alternative for landing humans on Mars’ surface. Because it’s so dangerous and expensive to put a crew on the Martian surface, one alternative is to first send a small crew to orbit the planet, allowing them to operate robots on the Martian surface.

(Credit: Kerbal Space Program/ NASA) Project Longshot was a mission designed by the United States Navy to leave the solar system entirely and visit the nearest star, Alpha Centauri. Longshot was proposed in the late 1980s, and the project’s engineers crafted an elaborate plan to achieve this daunting task. The spacecraft itself would have been constructed at the International Space Station over a period of decades before eventually beginning its mission sometime in the 2000s. Longshot would’ve used a long-life nuclear fission reactor to travel over 23 trillion miles to its destination. Engineers at the time expected it to take about 100 years to get to Alpha Centauri, a triple star system 4.3 light years away. Once there, Longshot would enter orbit around Centauri B to collect data on interstellar medium and provide a glimpse into the characteristics of a three-star system. Due to the extraordinary distance, it would have taken 4.5 years to beam the scientific data back to Earth.

(Credit: American Bosch Arma/Frank Tinsley) The Lunar Unicycle is just as fun as it sounds. This unique take on a lunar rover was another idea from Frank Tinsley and the ARMA Corporation, dating back to 1959. It was designed to conduct an initial survey of the lunar surface. A giant ball with tire-like treads wrapped both vertically and horizontally on the sphere for gripping the moon's surface would help move the unicycle around. An umbrella-like overhang of solar panels would collect power from the sun and power the unicycle during rover exploration. There were even living quarters incorporated into the plans to accommodate explorers conducting long-term missions outside of the temporary lunar base. The concept for this proposed rover prototype was conceived with the assumption that humankind would have colonized the moon before the 1980s. NASA and universities still hold rover-designing competitions for exploring surfaces like Mars where there’s dust and sand dunes to get stuck in. Maybe a Martian unicycle isn’t a far off possibility. Steve Matousek works as a mission concept designer at JPL’s Innovation Foundry and thinks referencing fictional ideas is still relevant. “When we think of missions, we still occasionally look back at science fiction and think, now how would we really explore that planet or moon? If there’s a reason to explore it, then you can expect us to rise to the occasion and go see what’s happening, wherever it may be,” he said.