2019 Could Be a Big Year for Private Spaceflight 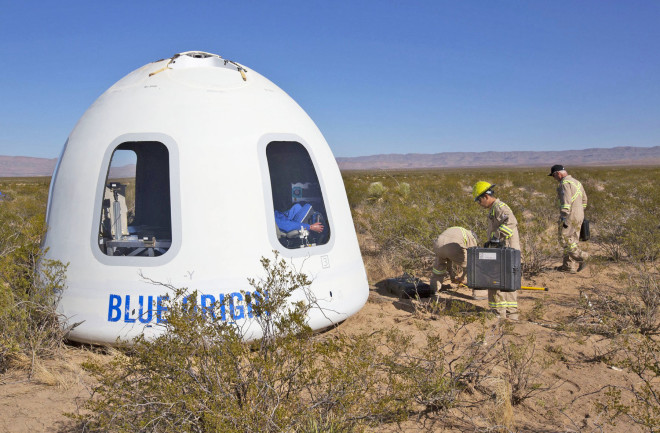 The upcoming year is shaping up to be a big one for private spaceflight. A number of big players in the race to get paying passengers to space seem poised to actually make that happen, and companies like Boeing and SpaceX have announced a number of ambitious goals. It looks like they might be beat by the Brit, though. Last week, billionaire entrepreneur Richard Branson claimed that his company Virgin Galactic will send astronauts into space by Christmas of this year. Branson told CNN that he is “pretty confident” about this goal. "We have a brilliant group of astronauts who literally believe 100% in the project, and give it their everything," Branson said to CNN. Virgin Galactic’s rocket-powered plane SpaceShip Two will make this trip after it detaches from beneath the wing of a specially built airplane, the "White Knight 2". The plane has so far successfully completed a number of test flights at lower altitudes, but Branson admits that the plane's first flights to space will be dangerous. The first few runs will have just a test pilot on board with no passengers, and Branson aims to be the first passenger to take SpaceShip Two into space. The ultimate goal is, of course, to ferry tourists to space aboard the craft. Amazon CEO Jeff Bezos shares that goal for his spaceflight company Blue Origin. Starting next year, Bezos aims to use Blue Origin’s New Shepard rocket to take paying passengers and experiments into space. New Shepard is Blue Origin’s reusable suborbital rocket system, and it's designed to take passengers and experiments just over the edge of space and back, a trip that would take about 11 minutes from takeoff to touchdown. During this flight, passengers would be weightless for about four minutes of the flight and will be far enough away from the planet to see the curvature of the Earth. If Bezos is correct and Blue Origin is able to start launching passengers on space rides, the company could make hundreds of thousands of dollars per passenger.

As anticipated, SpaceX is pushing forward with their plans to launch the Crew Dragon spacecraft, the company’s first commercial crew vehicle, in 2019. SpaceX recently announced that they will launch the first unmanned test flight with Crew Dragon on January 7, 2019. The vehicle is scheduled to launch from the Kennedy Space Center’s Launch Complex 39A, which was once used for NASA's Apollo and Space Shuttle programs. This launch date is subject to change, however, as NASA administrator Jim Bridenstine has warned. Bridenstine stated on Twitter that a number of factors, including review processes throughout December, could impact SpaceX’s launch schedule. [embed]https://twitter.com/JimBridenstine/status/1066382438929182721[/embed] SpaceX aims to launch the first crewed flight with Crew Dragon in June 2019, but this is also a tentative date. For their part, Boeing plans to launch Starliner, the company's first commercial crew vehicle, in 2019. The company has its first crewless test flight scheduled for March 2019 and its first piloted flight in August 2019. If both SpaceX and Boeing manage to stick to these dates, the companies could both be launching to the International Space Station by as early as next August. However, SpaceX and Boeing might face delays, as NASA Administrator Jim Bridenstine has ordered a safety review of both SpaceX and Boeing. This safety review was allegedly prompted by SpaceX CEO Elon Musk’s smoking weed on Joe Rogan's podcast earlier this year. But Musk’s behavior wasn’t solely responsible for the review, as Bridenstine has stated that he wanted to conduct workplace-safety reviews of both companies even before Musk participated in the podcast. This safety review will begin in 2019 and will take months to complete. Commercial spaceflight companies are working to put more humans in space. Whether they aim to rocket paying passengers or professional astronauts into space, private industry is creating more opportunities for humans to get there. NASA is beginning to embrace this influx of private spaceflight companies, and the agency recently partnered with nine private space firms that will be a part of their Commercial Lunar Payload Services (CLPS) program. While companies in the program will create spacecraft to ferry crewless payloads to the moon, these efforts could also support the future of humans on both the moon and, eventually, Mars.