Fancy yourself a photographer? Then you might want to enter the 2012 International Earth and Sky Photo Contest, which is being held to promote the importance of dark skies. 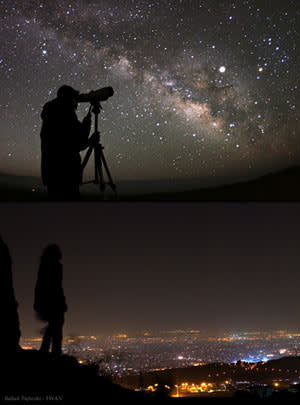 It's being organized by three groups of which I highly approve; The World at Night, Global Astronomy Month (part of Astronomers Without Borders), and the National Optical Astronomy Observatory. As they say on the site, the idea is:

Submitted photographs must be created in the "TWAN style" -- showing both the Earth and the sky -- by combining elements of the night sky (e.g., stars, planets, the Moon or celestial events) set against the backdrop of a beautiful, historic, or notable location or landmark. This style of photography is called "landscape astrophotography". This is similar to general "Nightscape Photography" but with more attention to the sky, astronomical perspectives, and celestial phenomena.

There's lots more info on the site itself. The contest closes on April 22, so get cracking! And don't forget you have the perfect opportunity to the west over the next couple of days for a fantastic night scene. Image credit: Babak Tafreshi and TWAN