#2: The LHC Begins Its Search for the "God Particle"

After many years and billions of dollars, the LHC had its fateful first test run. 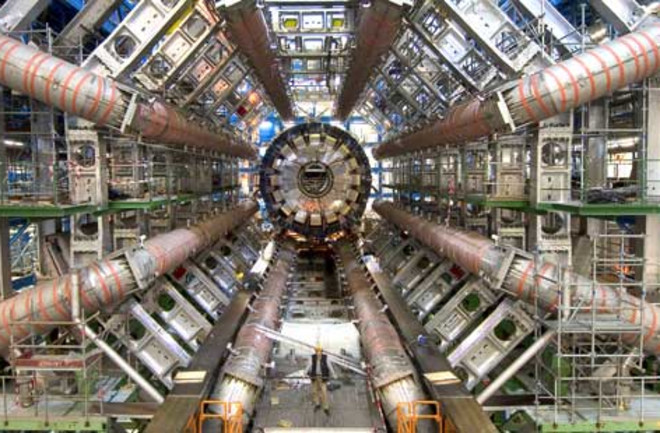 A worker stands in front of one of the LHC's enormous particle detectors. | Maximillien Brice/CERN

The most astonishing thing about the Large Hadron Collider (LHC), the ring-shaped particle accelerator that revved up for the first time on September 10 in a tunnel near Geneva, is that it ever got built. Twenty-six nations pitched in more than $8 billion to fund the project. Then CERN—the European Organization for Nuclear Research—enlisted the help of 5,000 scientists and engineers to construct a machine of unprecedented size, complexity, and ambition.

Measuring almost 17 miles in circumference, the LHC uses 9,300 superconducting magnets, cooled by liquid helium to 1.9 degrees Kelvin above absolute zero (–271.3º C.), to accelerate two streams of protons in opposite directions. It has detectors as big as apartment buildings to find out what happens when these protons cross paths and collide at 99.999999 percent of the speed of light. Yet roughly the same percentage of the human race has no idea what the LHC’s purpose is. Might it destroy the earth by spawning tiny, ravenous black holes? (Not a chance, physicists say. Collisions more energetic than the ones at the LHC happen naturally all the time, and we are still here.)

In fact, the goal of the LHC is at once simple and grandiose: It was created to discover new particles. One of the most sought of these is the Higgs boson, also known as the God particle because, according to current theory, it endowed all other particles with mass. Or perhaps the LHC will find “supersymmetric” particles, exotic partners to known particles like electrons and quarks. Such a discovery would be a big step toward developing a unified description of the four fundamental forces—the “theory of everything” that would explain all the basic interactions in the universe. As a bonus, some of those supersymmetric particles might turn out to be dark matter, the unseen stuff that seems to hold galaxies together.

To the uninitiated, all this talk of new particles can be baffling, admits physicist and Nobel laureate Frank Wilczek of MIT. “There are a lot of particles already,” he says. “It becomes a long shaggy-dog story with a lame punch line. Who cares?” A better way to appreciate the importance of the LHC, Wilczek suggests, is to remember that, according to quantum mechanics, those particles are also waves on a sea that pervades the universe—and we are like fish in that sea, slowly cottoning to what’s around us. “The equations tell us that what we perceive as empty space is in fact not empty,” Wilczek explains. “It’s a material that changes the way things behave. We’re embedded in this medium, we know it’s there, but we don’t know what it’s made of. The LHC is the instrument that’s going to tell us.”

The questions may seem recondite, but the answers matter crucially. If there were no Higgs field, electrons would have no mass and atoms would be infinitely large. In short, our world would not exist. The LHC may help explain why it does.

When protons start colliding in the LHC—in the test run in September, they ran just one way around the track—they will each carry no more energy than 14 flying mosquitoes, but this energy will be crammed into a space one-trillionth the size of a mosquito. The concentrated energy will be like a rock dropped into the quantum sea. The resulting ripples will stir up new particles.

First, though, CERN physicists have to get all the parts of the world’s most complicated physics machine working correctly. On September 19, nine days after champagne flowed in the LHC control room, a faulty electrical connection between two magnets caused a helium leak that put the whole device out of commission. As a result, the accelerator, already a year late in starting, may not create its first collisions until next spring.