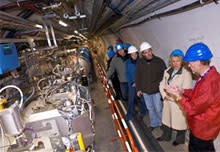 Today at 10 a.m. Swiss time, researchers fired up the Large Hadron Collider (LHC), successfully sending a stream of protons all the way around a 17-mile track for the first time. The enormous collider has been eagerly anticipated by physicists, who hope the device will answer questions about the behavior of subatomic particles and reveal secrets of the universe, but some people have also worried (needlessly, physicists say) that its unprecedented experiments will cause the world to end. For all that hype, the action today was somewhat anticlimatic:

Two white dots flashed on a computer screen indicating that the protons reached the final point of the world's largest particle collider [AP].

As many scientists have pointed out, today's test run didn't involve any actual collisions; those will come later when particles shoot around the track in both directions and smash into each other. Therefore today's event could never have produced any breathtaking results, it was simply intended to test the equipment. Physicists do have good reason to be delighted that the LHC is finally ready for action.

The LHC is a US$4.1 billion proton smasher that, when operating at full strength, will be much more powerful than any accelerator to date. Using superconducting magnets, it will accelerate bunches of protons to nearly the speed of light — and collide them at energies of 7 teraelectronvolts (trillion electronvolts). As energy and mass are equivalent under Einstein's rules of relativity, researchers hope that the collisions will generate super-heavy and hitherto unseen particles [Nature News].

The first experiments are likely to involve a hunt for a hypothetical particle called the Higgs boson, an elusive particle first predicted in the 1960s which is thought to endow other particles with mass. However, there are piles of other questions that the LHC can tackle.

Physicists say they hope to prove within two years the existence of a particle that creates dark matter.... As the first beams of protons begin to lap at 11,000 revolutions a second, the resulting collisions may help explain the building materials of about a fifth of the missing universe. They may also reveal what so-called dark energy is and why the expansion of the universe is accelerating instead of slowing, as predicted by theory [Bloomberg].

The SciencesWhat Is A Blazar? It's Like Staring Down The Barrel Of A Black Hole
Recommendations From Our Store