100,000 Supernovas Erupted in the Milky Way a Billion Years Ago

The Very Large Telescope in Chile spots signs of a massive ancient explosion at the center of the Milky Way. 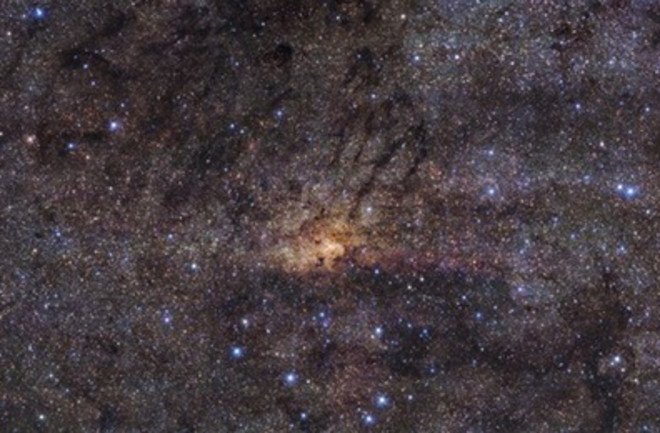 This image of the Milky Way's center, taken with the HAWK-I instrument at the Very Large Telescope, reveals clues about an ancient burst of star formation. (Credit: ESO/Nogueras-Lara et al.)

The European Southern Observatory’s Very Large Telescope in Chile has captured a new glimpse at the history of the center of our Milky Way. Astronomers say they’ve found evidence that there was once a burst of star formation so intense that it created over 100,000 supernova explosions.

According to the new data, the Milky Way was once what astronomers call “a starburst galaxy.” It’s an area commonly seen in other parts of the universe where stars form at a fast rate. About 80 percent of the stars in the center of the Milky Way were formed between 8 billion and 13.5 billion years ago. But about 1 billion years ago, another intense star-formation burst happened, creating many massive new stars. These large stars live shorter lives than small stars. And when large stars die, they explode. So the starburst led to a surge in supernovae and a dramatic period of star formation all at around the same time.

“This burst of activity, which must have resulted in the explosion of more than 100,000 supernovae, was probably one of the most energetic events in the whole history of the Milky Way,” said researcher Francisco Nogueras-Lara in a press release.

The new data also throw out the old theory that all stars were formed at around the same time.

The study was published in Nature Astronomy.