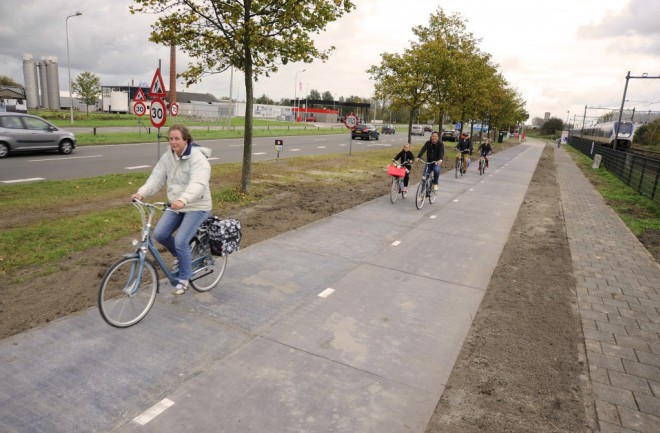 (Courtesy: SolaRoad) Dutch bicycle commuters will soon be riding on sunshine — well, kind of. The Netherlands announced that it is putting the final touches on a 230-foot bike lane that’s constructed with solar panels. The bike path, set to officially open Nov. 12, will be the first publicly accessible solar road in the world.

The pilot bike lane is just a small segment of a path the runs along a provincial road in the town of Krommenie, which is roughly 15 miles north of Amsterdam. The bike path was built using square concrete modules fitted with solar cells. A one-centimeter-thick layer of tempered glass fits over the top of the cells. Although the panels may sound delicate, they can handle the weight and pressure of a truck without cracking. But since the panels are in a fixed position, they generate 30 percent less energy than those installed on rooftops. To get the most from the solar path, panels were installed on angles to let the rain wash off dirt. The Netherlands Organization for Applied Scientific Research (TNO) spearheaded the $3.74-million project, dubbed the SolaRoad. The plan is to extend the bike path to 328 feet by 2016. By then, the path should generate enough power to light three homes.

Now, scientists will monitor the bike path for a three-year period, taking measurements and performing tests along the way. They primarily want to determine how much power the road actually generates, how it stands up to the roughly 2,000 daily riders, and what it’s like to bike on. But if all goes well, Stan de Wit of the Netherlands TNO believes that up to 20 percent of the Netherlands’ 87,000 miles of roadway could be solarized, the Guardian reports. The solar roads could potentially power anything from traffic lights to electric cars.

Here in the United States, Julie and Scott Brusaw, engineers from Idaho, are working to mainstream solar roads. They made a big splash earlier this year when their video “Solar FREAKIN’ Roadways!” went viral. Since then, they’ve raised over $2.2 million through a crowdsourcing campaign. They hope to start off small: replacing concrete driveways, bike paths, patios and sidewalks with solar panels. Eventually, they’d like to set their sights on the nation’s highway system. For now, it looks like the Netherlands is already on that path.