Unzip a Carbon Nanotube, Get a Nanoribbon, Revolutionize Electronics? 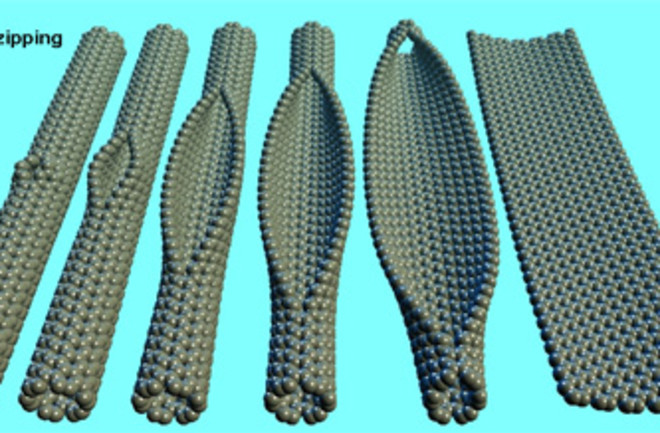 Two groups of researchers have found ways to "unzip" carbon nanotubes to make nanoribbons of graphene, and experts say the development could point the way towards a new generation of electronics, including computer chips that are faster and tinier than the silicon-based chips used today.

Graphene, an atom-thick sheet of honeycombed carbon, is one of the hottest materials around. It conducts electrons well, but is thin, transparent and strong, making it potentially useful in displays and solar panels. Ribbons of graphene could be more useful still. At widths of around 10 nanometres or less, electrons are forced to move lengthwise, and make the graphene behave as a semiconductor [Nature News].

However, the ribbons have proved extremely difficult to produce.

Previously, nanoribbons of graphene [were] cut from larger sheets using chemical methods that, like a blunt pair of scissors, offer little control over the width of the ribbons [New Scientist].

In the two new studies, both published in Nature, the research groups found ways to unroll carbon nanotubes to produce nanoribbons. One team, led by Hongjie Dai, sliced

the tubes using an etching technique borrowed from the semiconductor industry. They stuck nanotubes onto a polymer film and then used ionized argon gas to etch away a strip of each tube. Once cleaned, the remaining ribbons were just 10–20 nanometres wide. [The other team, led by James Tour, used] a combination of potassium permanganate and sulphuric acid to rip the tubes open along a single axis. The resulting ribbons are wider — around 100–500 nanometres — and not semiconducting, but easier to make in large amounts [Nature News].

The researchers say there are an enormous number of potential applications for nanoribbons. Tour's larger ribbons could be used in touch-screen displays, flexible electronics, and solar panels, he says, noting that his

nanoribbons are easy to process because they are graphene oxide, which is soluble in water. "You can use sheer force to align them like logs in a river lining up in parallel," says Tour. "You can paint them down, and they will align" [Technology Review].

Dai's thinner ribbons will likely be used in electronics due to their semiconducting ability. Both methods are being licensed for commercial development, the researchers say. Related Content: 80beats: New “Nanogenerator” Could Power Your iPod With Your Own Movements 80beats: Carbon Nanotube Ribbons Could Give Superman a Run for His Money 80beats: Self-Organizing Nanotech Could Store 250 DVDs on One Coin-Size Surface 80beats: Carbon Nanotubes Could Replace Platinum and Lead to Affordable Hydrogen Cars 80beats: Paper-Thin Nanotube Speakers Can Turn Up the Volume 80beats: Nanotubes Could Provide the Key to Flexible ElectronicsImage: Dmitry V. Kosynkin

Animals Can Find Their Way Home, But We Aren’t Sure Exactly How