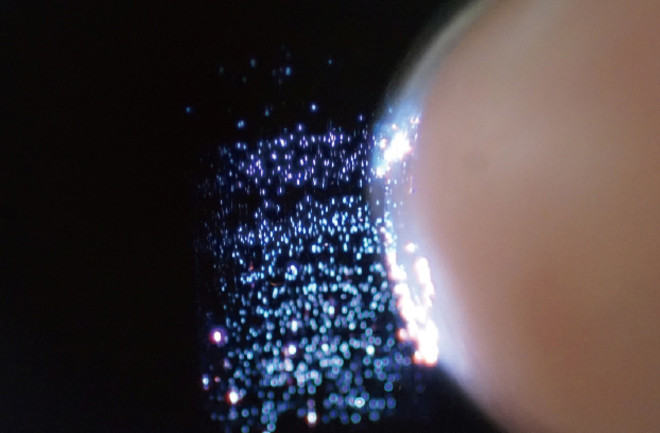 At a Los Angeles tech show in August, Japanese researchers vaporized visitors’ fingertips with high-energy lasers. They were not demonstrating a new form of torture. On the contrary, says principal investigator Yoichi Ochiai, their laser plasma display is the future of entertainment.

Ochiai has created the first airborne hologram that can be physically felt and manipulated. He’s done so by precisely focusing infrared laser light to selectively ionize, or steal the electrons from, air molecules at the beam’s focal point, generating a flash of bluish-white plasma. Two-hundred-thousand flashes per second are sufficient to generate a three-dimensional moving image.

Ordinarily, plasma is dangerously hot; Ochiai’s tests with nanosecond blasts quickly incinerated bits of leather. But by shortening the bursts from nanoseconds to femtoseconds — quadrillionths of a second — Ochiai’s team can make the plasma safe for fingers. Although the ultrashort bursts do ionize the skin’s surface, turning it into plasma, it’s not long enough to cause damage. Instead, the ionization makes shock waves across the finger’s surface, resulting in a tingling sensation. Ochiai says it feels like touching sandpaper.

Contact with flesh also causes the plasma to brighten, an effect Ochiai plans to exploit for interactive holograms, noting that the brightening can provide a visual cue for video tracking.

Not only can a user touch the hologram, but doing so also can alter the image, allowing for interactive applications in the future. (Credit: Yoichi Ochiai/University of Tsukuba)

And he intends to go big. Ochiai foresees fully immersive holographic experiences in concert halls and stadiums — as well as aerial 3-D markers for roads and runways — all within decades. “I’m a 28-year-old assistant professor,” he remarks. “I think I can make it before my retirement.”