To Win the Evolutionary Race, Robots Learn to Deceive 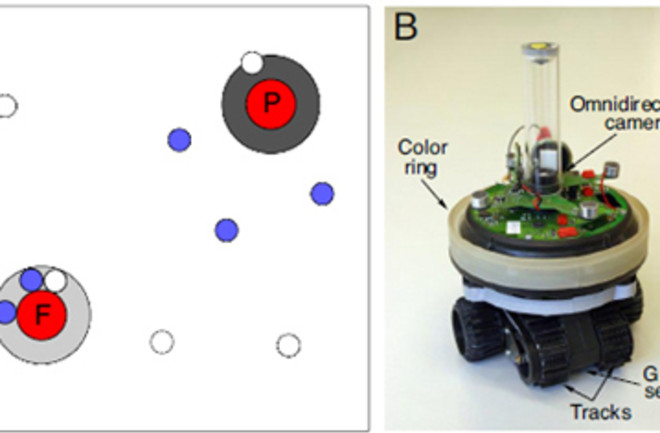 Survival of the fittest is a brutal game, as a group of robots in a Swiss lab have just demonstrated. When the robots competed for points and only the most successful passed on their computer code (which is analogous to our genetic code), they soon evolved into greedy deception-bots that tried to horde all the points for themselves.

The robots — soccer ball-sized assemblages of wheels, sensors and flashing light signals, coordinated by a digital neural network — were placed by their designers in an arena, with paper discs signifying “food” and “poison” at opposite ends. Finding and staying beside the food earned the robots points.... After each iteration of the trial, researchers picked the most successful robots, copied their digital brains and used them to program a new robot generation, with a dash of random change thrown in for mutation [Wired.com].

The first generations of robots rolled around the arena while flashing their lights at random intervals. But as they were programmed to stay by the food to collect more points, ensuing generations learned to follow the lights of their fellow robots to find food. But because

space is limited around the food, the bots bumped and jostled each other after spotting the blue light. By the 50th generation, some eventually learned to not flash their blue light as much when they were near the food so as to not draw the attention of other robots, according to the researchers. After a few hundred generations, the majority of the robots never flashed light when they were near the food [Technology Review].

A few robots even evolved to be repelled by the blue lights, on the principle that any robot flashing its light must be far from food. The study, which will be published in the Proceedings of the National Academy of Sciences, suggests that similar evolutionary

processes are at work in nature. When animals move, forage or generally go about their lives, they provide inadvertent cues that can signal information to other individuals. If that creates a conflict of interest, natural selection will favour individuals that can suppress or tweak that information, be it through stealth, camouflage, jamming or flat-out lies [Not Exactly Rocket Science].

Related Content: DISCOVER: Robots Evolve and Learn How to Lie 80beats: I, for One, Welcome Our New Robot Scientist Overlords 80beats: Helicopters Learn to Fly Themselves by Studying an Expert Pilot 80beats: Autonomous, Snooping Robots Almost Ready for the Front Line 80beats: Rat Neurons Build a “Biological Brain” for a RobotImage: PNAS