Rat Neurons Build a "Biological Brain" for a Robot 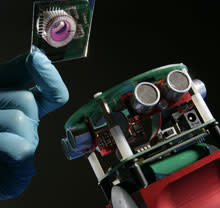 Researchers have built a "biological brain" for a robot using a dish full of rat neurons, and have harnessed the neurons' electric signals to navigate the robot around a pen. Researchers say the experiment should add to their understanding of how brain cells function, and could provide insight into what goes wrong in neurons affected by diseases like Alzheimer's and Parkinson's. The robot's

controller nestles inside a small pot containing a pink broth of nutrients and antibiotics. Inside that pot, some 300,000 rat neurons have made - and continue to make - connections with each other. As they do so, the disembodied neurons are communicating, sending electrical signals to one another just as they do in a living creature [New Scientist].

The neurons' automatic drive to connect and communicate may be an indication of how sturdy brain cells are; researcher Steve Potter, who has been involved in similar experiments, says that brain cells have "evolved to reconnect under almost any circumstance that doesn't kill them"

The electrical signals are sent to the robot via a bluetooth radio link, and are interpreted as motion commands. Researchers say the robot, which they nicknamed Gordon, can learn behavior to a certain extent.

When it hits a wall, for example, it gets an electrical stimulation from the robot's sensors. As it confronts similar situations, it learns by habit. To help this process along, the researchers also use different chemicals to reinforce or inhibit the neural pathways that light up during particular actions [AFP].

Lead researcher Kevin Warwick (who has had two electronic chips implanted in his arm as part of Project Cyborg) says that Gordon currently swerves to avoid a wall eight out of 10 times:

"The signals and the pathways are strengthening as each action gets repeated" [Telegraph].

Once the robot can routinely navigate around its pen and can recognize elements of its environment,

the researchers plan to disrupt the memories in a bid to recreate the gradual loss of mental faculties seen in diseases such as Alzheimer's and Parkinson's. Studies of how neural tissue is degraded or copes with the disruption could give insights into these conditions [BBC News].

But researchers stress that this control system is an extremely simplified and scaled-down version of what happens in a human brain; while Gordon has 300,000 neurons, a human has about 100 billion. For more on biological robot brains, see the DISCOVER article, "Brain in a Dish." Image: University of Reading

How To Turn Your Smartphone Into A Robot