Bioelectronic devices surgically implanted on nerves interfere with and change the body’s own processes to make them function better. 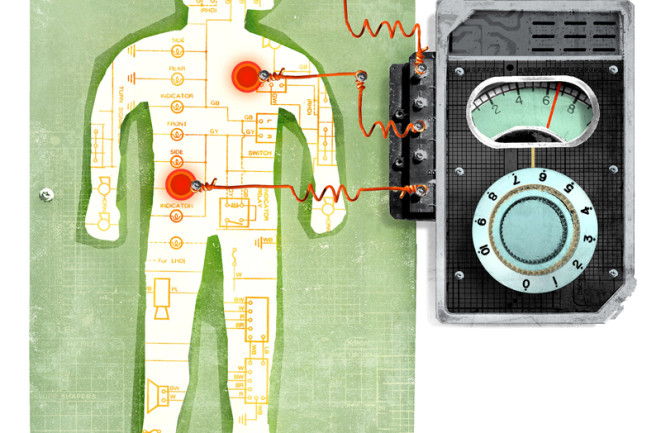 David Kessel’s high blood pressure started when he was just 13 years old. His doctors gave him many tests, but they never determined the cause. By his early 20s, he was taking 17 different pills a day, yet he still had a hard time climbing a flight of stairs without getting winded. He wore a blood pressure monitor, and its reading routinely hovered dangerously high.

In summer 2005, Kessel signed up for a clinical trial in St. Louis, near his home. Surgeons working with a Minneapolis-based company called CVRx implanted an electrode the size of a half-dollar on his carotid artery. After the surgery, a battery-powered generator implanted in his chest electrically stimulated pressure sensors in the artery. Those sensors sent impulses to the brain, which, in turn, fired signals to reduce his heart rate and relax his blood vessels.

“I could actually feel my blood pressure going down,” says Kessel. Nine years later, he not only can get through his days without feeling exhausted, but he can also go on long bike rides with his two daughters.

Pharmaceuticals are often a doctor’s first line of defense when treating everything from infection to diabetes. But if the fledgling field of bioelectronic medicine takes off, devices like Kessel’s could give doctors a whole new tool in their arsenal.

These new bioelectronic implants are designed to sit on or near nerve bundles. There, they modulate the electrical impulses that travel between our brain and our organs. These impulses regulate everything from heart function to body movement.

Disease or injury can prevent nerves from sending appropriate signals, or force them to send inappropriate ones. By reading and regulating those signals, the new devices — most are in their early stages and many have yet to be officially approved — alter how specific nerves fire, thereby modulating organ function. That, in turn, could treat ailments as diverse as sleep apnea, rheumatoid arthritis, diabetes, obesity and more.

CVRx’s latest technology can help the body regulate blood flow. The generator (bottom), implanted beneath the collarbone, sends signals through the lead (top) to the brain. (Credit: CVRx)

The first of these implants have begun to reach the market. In 2014, the FDA approved implants to treat sleep apnea. This year, the agency approved a weight-control device that creates a feeling of fullness. Many companies are investing in the technology, including pharmaceutical giants such as GlaxoSmithKline, which launched a venture-capital fund that will invest $50 million into companies creating bioelectronic medicines.

“Researchers are even exploring how the technology can be used to treat cancer,” says Kristoffer Famm, head of the Bioelectronics Research and Development unit at GlaxoSmithKline. “It’s going to be exciting here over the next five years.”

Medical devices that electrically stimulate tissues are not new, but they have emerged into the medical mainstream in recent decades. Cochlear implants help the hard of hearing by stimulating neurons in the brain’s auditory cortex, while deep brain stimulation improves mobility for those with Parkinson’s disease by delivering electrical pulses that inhibit abnormal nerve signals. People with paraplegia can control their bladder through sacral nerve stimulation, facilitating communication between the bladder and brain.

But these devices work crudely, and in many cases they disperse electricity to many nerve bundles instead of specific ones that control individual functions. Sometimes this results in negative side effects. For example, stimulation of the vagus nerve — a major nerve that travels from the brain to the colon, regulating everything from our hearing to our heartbeat — is a common treatment for epilepsy, but it can cause difficulty swallowing.

These devices are medically revolutionary, and they represent just a small sample of what is possible for bioelectronic medicine, says neurosurgeon Kevin Tracey, president of the Feinstein Institute at North Shore LIJ Health System in New York. In the late 1990s, Tracey discovered that stimulating the vagus nerve also alters immune function. A company he later founded, SetPoint Medical, discovered that stimulating the nerve could stop inflammation to fight rheumatoid arthritis.

“We found that the immune system functions as an innervated organ just like the heart,” says Tracey.

It was a game changer. Autoimmune diseases — such as rheumatoid arthritis, multiple sclerosis, inflammatory bowel disease and lupus — now could be treated electrically. SetPoint Medical went on to develop the first bioelectronic devices to treat rheumatoid arthritis. In 2012 the company announced results from the first clinical trial for European patients with rheumatoid arthritis, with eight people participating in the trial and nearly two-thirds experiencing benefits.

To develop new bioelectronic therapies, scientists must first map the neural circuits and determine patterns of neural firing that correspond to healthy organ function. Then they need to figure out how those patterns go wrong to cause disease. To that end, the National Institutes of Health has invested $248 million over the next six years toward mapping the detailed wiring of the nervous system.

Neurons also have characteristic patterns of electrical impulses, akin to the dots and dashes in Morse code, and neuroscientists are investigating them to determine how they malfunction to cause disease and how to restore the pattern displayed in a healthy body. Meanwhile, research on brain-machine interfaces is producing electrodes that can interact with individual neurons, giving scientists more precise control of neural circuits than ever before. And scientists are designing microchips based on brain function, to make them work more intuitively.

Engineers are also working to miniaturize bioelectronic devices, lowering the risk for patients when the devices are surgically implanted. When surgeons wrapped Kessel’s half-dollar-size electrode around the carotid sinus, for example, they had to dissect around many nerves — a procedure that carried a large risk of nerve damage.

To keep patients safer, biomedical engineer Kip Ludwig, who worked at CVRx years after the start of Kessel’s trial, and his colleagues spent several months using computer models to design a far smaller device. They tested prototypes in laboratory animals and worked with vascular surgeons to see how the design would impact the surgical procedure and to better understand the physiology of the process. The company also performed “benchtop” simulations on a prototype that mimicked worst-case scenarios — such as bending and stretching of the device — to ensure it would stand up to normal wear and tear over a lifetime of use and wouldn’t degrade and release harmful substances.

The result was a durable electrode 8 millimeters across, about the diameter of a pencil eraser, that surgeons can implant on the carotid artery with just a tiny incision, and a longer-lasting battery that minimizes replacement operations. Another CVRx team shrank the battery-powered generator by about half to roughly the size of a USB thumb drive. In August 2013, Kessel had the newest version of the device implanted, and it works as well as the original.

The goal of streamlining useful but clunky bioelectronics actually drives the whole industry right now, says Ludwig, who has since left CVRx and is now the program director for neural engineering at the National Institutes of Health, where he allocates money to other bioelectronics researchers to develop smaller, more effective devices.

Second Sight, a bioelectronics company in Sylmar, Calif., uses electrodes to stimulate the retina, and the devices have partially restored sight in nearly 100 patients. New cochlear implants now allow deaf people to have phone conversations. Last year, a Columbus, Ohio-based team implanted an electrode in a paralyzed man’s brain and connected it to a sleeve on his wrist, effectively allowing the man to move his hand with only his thoughts.

Bioelectronics could one day even help people with paraplegia walk. University of Alberta researchers are conducting clinical testing this year that will involve two patients with severe spinal cord injuries. A temporary bioelectronic device implanted on the lower spinal cord will transmit electrical impulses, mimicking brain signals, from below the spinal injury to the legs. They hope the device will result in mobility.

“I don’t think we’ll get to the point where a drug will make a blind person see and deaf people hear,” Ludwig says. But “that’s what we’re seeing with these devices.”

Electrical medicine, such as this wireless pacemaker designed by Stanford, keeps getting smaller and more powerful. (Credit: Austin Yee/Stanford University)

Electrical treatments are unlikely to replace drugs, Ludwig says. Instead, he imagines them joining forces. For decades, drug pumps have been a “set it and forget it” type of treatment, delivering the same amount of drugs regardless of the patient’s condition, says Ludwig. But a device that combines electrical treatments and drug pumps could target an area of the body, use sensors to read the patient’s physiology and condition, and deliver the correct dose of drugs to just the right tissue.

Ludwig also envisions a novel combination treatment, part pharmaceutical and part bioelectronics: pills that dissolve into particles in the body, while an external power source, similar to today’s ultrasound machines, would use magnetic fields to remotely direct the particles to different nerves. This futuristic medicine, currently in development, would eliminate the need for surgical implants. It would be the ultimate smart pill that could one day help treat cancer or Alzheimer’s disease, Ludwig says.

In five to 10 years, we could see a device that’s monitored via Bluetooth technology hooked up to an iPad at a doctor’s office, Tracey says. And eventually, doctors will adjust their patients’ devices over the Internet, just as they might adjust the pills a patient takes.

Ludwig agrees; he continues to see the devices advance every day. “That’s really the power of it,” he says. “There’s no way of doing the equivalent with drugs.”

[This article originally appeared in print as "Impulse Control."]