The Year in Science: Technology 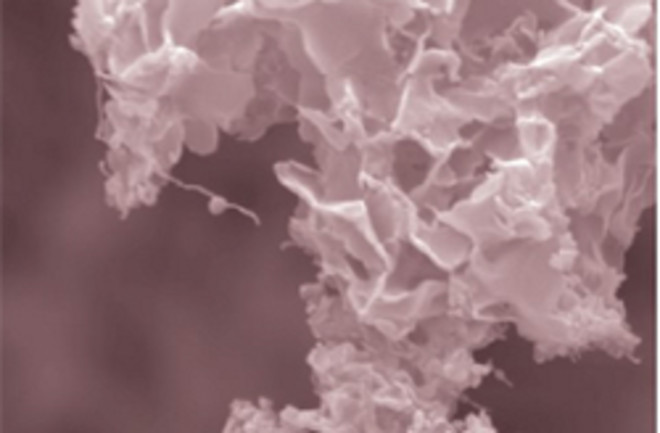 Carbon Nanotubes Burst Out of the Lab

Fourteen years after the discovery of the pencil-shaped molecules called carbon nanotubes, scientists are finally learning to exploit their remarkable properties. Nanotubes are nine times as strong as steel and can transmit 1,000 times as much electrical current as copper, but they are difficult to manipulate because each tube is just 1/350,000 as wide as the period at the end of this sentence.

In August Ray Baughman at the University of Texas in Dallas and his colleagues reported a way to weave nanotubes into usefully large material. With the help of Australian wool spinners, researchers had already developed a method to twist the tubes into long fibers. Expanding on that work, the Texas group created sheets of nanotubes so thin that an acre of the material weighs just a quarter of a pound. The sheets are good electrical conductors; they can also withstand more than 34,000 pounds per square inch of force without tearing and can endure temperatures as high as 840 degrees Fahrenheit without losing strength or conductivity. The Department of Defense, along with manufacturers of helicopter blades, solar electric cells, and robotics, has expressed interest. Baughman has made a sheet 33 feet long, and he is hard at work expanding his process.

Meanwhile, two teams are developing medical applications of nanotubes, taking advantage of the human body's ability to absorb carbon. Stanford University chemists have fabricated cancer-killing nanotubes that sneak inside tumor cells, and researchers at the University of California at Riverside are using nanotubes to speed the healing of broken bones. Materials scientist Robert Haddon has demonstrated that the bone-forming mineral hydroxyapatite will grow around a nanotube scaffold, replacing the collagen fibrils that grow naturally. "Bone needs to be strong but a little bit flexible," he says. "It's hard to imagine a better material than a carbon nanotube." —Zach Zorich

Most of us avoid thinking too hard about the origins of our dinners. We happily eat chicken nuggets, willfully forgetting that they are a meat product derived from formerly living birds. Now science is prepared to make our cognitive dissonance complete. Last June, in a paper published in the journal Tissue Engineering, an international team of researchers proposed a new kind of food handmade for sensitive carnivores (and maybe even vegetarians): meat that comes from a laboratory instead of a farm.

Clinical research scientists routinely grow muscle cells in the lab. And NASA-funded experiments have succeeded in culturing turkey muscle cells and goldfish cells as a potential way to feed astronauts on long space missions. Jason Matheny, a graduate student in agricultural economics and public health at the University of Maryland, and his colleagues turned this scheme earthward, proposing two methods for growing meat in bulk. One would culture thin sheets of meat, seeded by cells from a living animal, on a reusable polymer scaffold; the other would grow meat on small edible beads that stretch with changes in temperature.

Currently the process is far too expensive to bring lab-grown meat to the supermarket. A tasty fake steak is an even more distant dream: To have the structure of filet mignon, muscle tissue needs blood vessels, a major challenge to tissue engineers. Still, Matheny says that within several years, lab meat could be used in Spam, sausage, and even chicken nuggets. Europe has taken an interest. The Dutch government has invested $2.4 million in a project that would cultivate pork from stem cells.

But will people eat it? Matheny thinks so. "There's nothing natural about a chicken that's given growth promoters and raised in a shed with 10,000 others," he says. "As consumers become educated, a product like this would gain appeal."  —Sarah Webb

Most of the joints belonging to a three-foot-tall Cornell University humanoid are not powered like those in traditional robots. Instead, they swing freely in a surprisingly human-like manner.  | Courtesy Andy Ruina

In 2005 a new generation of robots revolutionized the way humanoids walk, one of the greatest challenges in engineering. They followed Honda's ASIMO, which wowed a cheering audience last winter by breaking into a two-mile-per-hour trot. ASIMO is based on technology that is much like that of a shuffling windup toy. Every maneuver is part of a programmed pattern, each posture a frozen moment in time, and an enormous amount of energy is needed to keep the body plugging along in a stiff-looking gait. By contrast, a nameless robot unveiled by engineers at Cornell University in February is modeled after antique toy figurines that make their way down a slope, depending only on gravity. The Cornell robot is the first to use principles of passive-dynamic walking to stroll on level ground, employing electrical energy equivalent to the metabolic energy a human would use. Most of the joints swing freely, naturally shifting mass like a pendulum. Another robot, named Rabbit, designed at the University of Michigan and the University of Nantes in France, may be the first to run in strides that look human. Its creators have made it dynamic, balancing on two points—it has no feet—and with the ability to adjust to obstacles and changes in terrain. Unlike ASIMO, which cannot balance in a fluid way, Rabbit can be shoved violently and regain its stability.  —Susan Kruglinski

Just when experts were beginning to fear that the conventional transistor would become as outmoded as the eight-track tape, legendary semiconductor guru Nick Holonyak and his colleagues have recast it—literally—in a whole new light.

Holonyak's team at the University of Illinois at Urbana-Champaign devised a transistor that is also an ultratiny laser, producing a narrow beam of light simultaneously with electrical current. "An ordinary transistor has only two signals: an electrical input and an electrical output," says coinventor Milton Feng. "The transistor laser has those plus a third output—a coherent photon beam," which can be transmitted by fiber-optic line for speed-of-light processing. "It is conceivable that connections on a circuit board can be made exponentially faster than is possible with conventional electronics alone."

Transistors typically consist of a sandwich of specially "doped" semiconductor materials: two chemically similar pieces called the emitter and the collector, separated by a thin layer of a different sort of substance called the base. Applying a voltage to the base permits the flow of current from emitter to collector. Some of that current is lost, however, as moving electrons from the emitter drop into "holes"—places in the base where electrons are missing—releasing energy in the process. "For years, people were just throwing away that base current, and it was dissipated as heat," says Holonyak, who invented the first practical light-emitting diode 44 years ago. "Milton kept saying that there was a lot of current density [in the base] to use" to power a laser. "I thought he was nuts. But it turns out he's right."

The researchers engineered their transistor's base with microscopic pockets called quantum wells, which trap the electrons and release them as laser light. In September they reported that the prototype could run at room temperature with a clock speed of three gigahertz—the same as a top-of-the-line PC chip. But they're confident that it will easily operate 10 or perhaps even 100 times faster.  —Curt Suplee

Tests on simulators show the likelihood of accidents increases greatly if the driver is chatting. | Courtesy David Strayer

High-tech gadgets make it possible for people to travel through time . . . well, sort of. To leap forward 40 to 50 years in physical abilities, merely talk on a cell phone while cruising down the road. Research at the University of Utah shows that when drivers between 18 and 25 chat on a cell phone, they cannot react to a braking situation any better than a 65- to 74-year-old. Employing a driving simulator to measure reaction times, psychologist David Strayer found teenagers have the greatest trouble combining driving and talking, but the problem affects all generations. "We see that accident rates, if you're using a cell phone, are about four times greater than if you're not using a cell phone," he says. "Cell phones seem to be a distraction across the age range." —Kurt Repanshek