The Physics of . . . Airplanes

An old, lofty theory of how airplanes fly loses some altitude

Last year was the 300th anniversary of the birth of Daniel Bernoulli, the swiss mathematician and polymath, and I celebrated by stomping on his memory. Not that I actually insulted the man; I just didn't mention him when I might have in two Discoverarticles. Born in 1700, Bernoulli never had a lot to say about airplanes while he was alive, and yet these days he is widely credited with keeping every one of them in the air. In an article on insect flight last April, I almost offhandedly maintained that an airplane wing diverts air downward, and that this "downward flow lowers the air pressure above the wing, lifting it ..."  Reaction from the readership was vivid. "Airplanes do not get lift by 'diverting air down!' " read one e-mail ("Subject: Enough Pseudo-Science Already!!!"). "This is third-grade science. Perhaps your writers and editors need remedial science?" Another reader: "So, your 'popular science' writers have done it again: Robert Kunzig talks off the top of his head without knowing what he is talking about. How much do you pay these guys? Too much or not enough?" 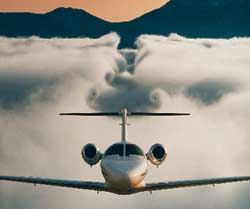 A Cessna Citation leaves a deep trough in the clouds beneath it, proof that it stays aloft by pushing air down. Photo Courtesy of Cessna Aircraft Company

Now that passions have had a chance to cool, I have two reasoned responses. First, I'm right and you're wrong. Second, I am but a humble mouthpiece for the real heretics, whom I should have acknowledged— but now is a better time anyway, because they've just published a good book. Their names are David Anderson and Scott Eberhardt, the book is Understanding Flight (McGraw-Hill), and the opening epigraph sums it up: "Forget Bernoulli's theorem." The question of how an airplane flies may seem like third-grade science, but aeronautical engineers can and do disagree on it. Scott Eberhardt is a professor of aeronautics at the University of Washington in Seattle, where he teaches a popular introductory class. In the typical aeronautics curriculum, he says, students are showered with complex equations but are never given an intuitive understanding of what lifts an airplane. "Most of the students who graduate today don't have a fundamental understanding because we haven't taught them that," says Eberhardt. "They can explain it in mathematics. But that's not understanding." David Anderson, a physicist at Fermilab, had precisely that experience when he studied physics at the University of Washington decades ago, before Eberhardt's time there. "When I was through, I had a good intuitive understanding of all of physics," he says. "But I didn't understand how a wing flew. I'd worked all the problems, aced all the tests— and I just had this feeling they were peeing on my boots and telling me it was rain." It's not fair to blame that kind of weather on Bernoulli, who died even before the first manned ascent in a hot-air balloon. But somewhere along the way in the 20th century, his famous— and perfectly true— principle got misapplied in everyman's explanation of aerodynamic lift. The explanation goes like this: Air flows faster over the top surface of the wing than underneath the bottom. Bernoulli's principle says that when any fluid moves faster— for instance as it passes a bottleneck in a pipe— the static pressure in it decreases. Therefore, borrowing Bernoulli's logic, the air above the wing must be at lower pressure than the air below. That lifts the wing. But why, in the first place, does the air on top flow faster? That, say Anderson and Eberhardt, is where the popular explanation crashes and burns. Even popularizers like me have wondered about the usual answer: The air flowing over the curved upper surface of the wing travels farther than the air traveling under the bottom, and so it has to travel faster to get to the trailing edge at the same time. The problem is, there is no earthly reason why the air should get there at the same time. In fact, it doesn't. Someone, somewhere (and let's hope it wasn't a science journalist) made up the "principle of equal transit times." The air on top actually gets to the trailing edge sooner than the air on the bottom, because it really does travel faster. But the popular explanation doesn't tell you why, and thus it is no explanation at all. So why does an airplane stay up? The question nagged at Anderson as he pursued his career at various physics labs. It bugged him especially when he was at Los Alamos in northern New Mexico and began piloting a Cessna 182. Much later, at Fermilab, Anderson found himself on a committee in charge of bringing in outside speakers from time to time to take the inmates' minds off the higgs boson. One day he decided to find an expert who could explain airplane flight. He called his alma mater and got put through to Eberhardt. "We were chatting, and I was kind of feeling him out," Anderson recalls. "Because if he was going to give me Bernoulli, I wasn't going to waste my money. So I said, 'What makes a wing fly?' And he said, 'Lift is a reaction force. The wing pushes the air down, so the air pushes the wing up.' And I said, 'Yes!'" Thus began a long collaboration that culminated in Understanding Flight. Eberhardt stresses that there is no new physics in the book. To understand lift you need only Newton's three laws and something called the Coanda effect. The Coanda effect is just the tendency of air or any even slightly viscous fluid to stick to a surface it is flowing over, and thus to follow the surface as it bends. As air follows the upper surface of a wing, it gets bent downward— because the surface is curved but also because the leading edge is tilted up (especially when ascending) at what is called the angle of attack. The air that is bent downward pulls on the air above it, distending it and creating a low-pressure zone. 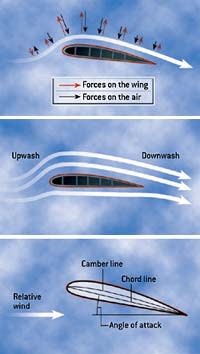 Flight Instructions The forces acting on an airplane's wings are as subtle as they are elemental. According to a principle known as the Coanda effect, air flowing over the top of the wing sticks slightly to the surface and is pulled downward. This produces a low-pressure zone above and a high-pressure zone below, which pushes the wing up. The greater a wing's "angle of attack," the more powerful its lift. Graphics adapted from Understanding Flight, David F. Anderson and Scott Eberhardt, McGraw-Hill, 2001; Graphics by Matt Zang

To bend the air downward, the wing has to exert a force on it (that's Newton's first law). That action inevitably elicits an equal and opposite reaction (Newton's third law). By means of the low-pressure zone above the wing and the higher pressure below it, the air exerts an upward force on the wing: That's lift. The size of the force is equal to the mass of air the wing has diverted downward multiplied by the acceleration of that air (Newton's second law). A pilot can increase the lift by flying faster (adding power) or by increasing the angle of attack (pulling back on the stick); either way the wing diverts more air down and behind the plane. The wings of a 250-ton airliner, Anderson calculates, pump down about 250 tons of air every second. "That's the problem with Bernoulli," he says. "There's no work done— it's all magic. It doesn't make sense that a wing could cut through the air like a knife, leave a small transient ripple in the air, and hold up a 250-ton airplane. A 250-ton airplane is working. It's holding itself up by brute force." Bernoulli, RIP? Well, not quite. After all, aircraft designers do use the Bernoulli principle, with obvious success, in their complex calculations of airflow. And you too can use it, if you want, to understand lift. But then think of things this way: The leading edge of a wing is an obstruction, like a bottleneck in a pipe. It squeezes the air flowing around it, and it squeezes more where the path is more curved— over the top of the wing. Obeying Bernoulli, the flow there speeds up, the press-ure drops, and voil&225;: lift. Both explanations are correct, really; there's no reason to get hot about the subject. But as far as I'm concerned, Anderson and Eberhardt ace a crucial test: They're a lot easier to explain to my third-grader than Bernoulli ever was. We'll see how they fly with the readers.