The First Ever Flight of a Pedal-Powered, Wing-Flapping Vehicle

August 2nd marked the first human-powered flight of an ornithopter. Wait, a what? It's pronounced awr-nuh-thop-ter, and it's an aircraft propelled by flapping wings, like a bird. First sketched by Leonardo da Vinci in 1485, people have been trying to improve on his design--and build a working model--for centuries. A group at the University of Toronto's Institute of Aerospace Studies made their own design, and in August, they successfully flew the first human-powered ornithopter. The pilot, a PhD candidate named Todd Reichert, sat in a tiny cockpit pedaling furiously to make the wings gracefully flap. Reichert explained the world's obsession with this strange machine:

"It's the original aeronautical dream, people first looking at birds saying, 'I want to do that, I want to flap my wings like a bird,'" said Reichert, laughing as he recounted the four years it took for his project to take flight. [Winnipeg Free Press]

The flight took place on August 2nd and was attended by a representative of the Fédération Aéronautique Internationale, the world-governing body for air sports and aeronautical world records, who was on hand to verify the world-record flight. The papers claiming the world's-first record were submitted this week, and the team is hoping it will become official in October. 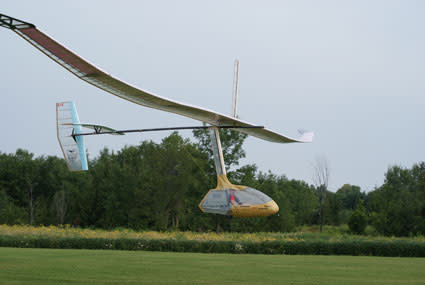 ) and weighs just over 90 pounds. It was designed and built by a team of 30 led by University of Toronto professor James DeLaurier

, and cost about $200,000 (Canadian) to build. To get the ginormous plane in the air, team members pulled it with a car until it was airborne and after about 65 flights, they were successful.

"Thousands of people have tried to do this for hundreds of years," said Reichert. "To be honest, I don't think it's really set in yet that I'm the one who has been successful. I was pushing with everything I had. When I finally let go and landed, I was hit with a breadth of excitement. It was pretty wild." [Vancouver Sun]

To power the plane, which is made mostly of carbon fiber, balsa wood, and foam, the pilot sits in a tiny cockpit below the wings, pedaling like a Tour de France racer on speed. The pedals push on a wire and pulley system connected to the wings, which makes them flap. The mechanics are so simple that you can even build your own, unmanned, ornithopter

. Reichert trained for four weeks for the flight, losing almost 20 pounds to ease the burden on the aircraft.

The machine's 19-second, 145-metre flight — believed to be a first for an [human-powered] ornithopter in aviation history — is the "completion of something that people have dreamt about for centuries," Reichert said Wednesday. "Through all these times thousands of people have tried and no one has been able to (achieve continuous flight)." [Winnipeg Free Press]

DeLaurier, who is one of the world's experts on ornithopters, made his own aviation first in 2006 by flying a motorized, manned ornithopter, but this, the first human-powered flight, was DeLaurier's real life ambition.

“(Reichert’s) ornithopter has since landed, but I’m still hovering a couple feet off the ground. It was a moment that’s difficult to describe,” DeLaurier said. [The Star]

DISCOVER: The Flight of the Butterfly

DISCOVER: The Physics of. . . Insect Flight

Image: Faculty of Applied Science & Engineering, U of T