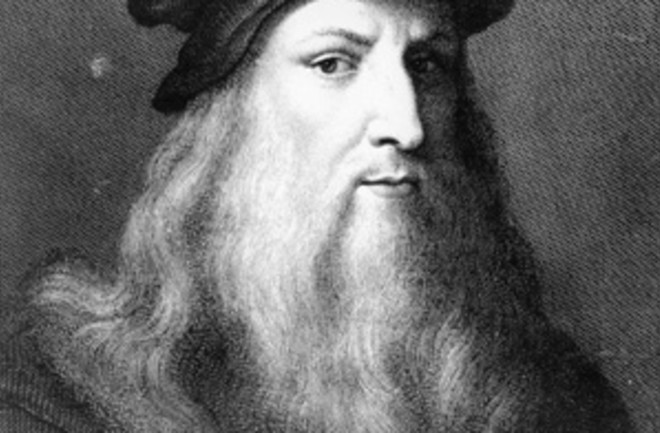 1. Leonardo was the love child of Caterina, a peasant, and Ser Piero, a lawyer and landlord. He was homeschooled and lacked a formal education in Greek and Latin.

2. He was an accomplished lyre player. When he was first presented at the Milanese court, it was as a musician, not an artist or inventor.

3. Leonardo narrowly beat a sodomy rap—possibly involving one of his male models—brought against him by Florentine officials.

4. Mona Lisa theory #1: Her smile means she was secretly pregnant.

5. Theory #2: She was amused by the musicians and clowns who entertained her while Leonardo painted her. (Another theory says the Mona Lisa is a portrait of Leonardo himself, slyly disguised. But you'd heard that one before, hadn't you?)

6. Columbia University art historian James Beck retorts, "As sure as the moon is not made of green cheese, this is not da Vinci in drag."

7. Then again, unusual for a painter, Leonardo left no definitive image of himself.

8. Of course, that was before she saw the picture: Researchers at the University of Amsterdam and the University of Illinois used face-recognition software to determine that the Mona Lisa is 83% happy, 9% disgusted, 6% fearful, and 2% angry.

9. Bill Gates bought the Codex Leicester in 1995 for $30 million. This manuscript, the only one not held in Europe, includes da Vinci's studies on hydraulics and the movement of water.

10. And Leonardo loved water: He developed plans for floating snowshoes, a breathing device for underwater exploration, a life preserver, and a diving bell that could attack ships from below. In case one had to.

11. Leonardo was the first to explain why the sky is blue. (It's because of the way air scatters light.)

12. And he figured out why the entire moon is dimly visible when it is a thin crescent. Its nightside is lit by light reflected from Earth, which appears 50 times brighter from the moon than the full moon appears here.

13. An ambidextrous, paranoid dyslexic, Leonardo could draw forward with one hand while writing backward with the other, producing a mirror-image script that others found difficult to read—which was exactly the point.

14. The Louvre recently spent $5.5 million rehanging the Mona Lisa inside a display case set into a wall, six feet behind a wooden barrier.

15. In August 2003, da Vinci's Madonna of the Yarnwinder, valued at $65 million, was stolen from Drumlanrig Castle in Scotland by two men posing as tourists. They escaped in a Volkswagen Golf.

16. Leonardo designed an armored car, a scythed chariot, a pile driver, a revolving crane, a pulley, a lagoon dredge, and a flying ship.

17. In December 2000, skydiver Adrian Nicholas landed in South Africa using a parachute built from one of Leonardo's designs.

18. I wonder what happens if . . . After dissecting cadavers, Leonardo replaced the muscles with strings to see how they worked.

19. Sometimes he could be such a dick: He was a big fan of puns and word games, and Folio 44 of his Codex Arundel contains a long list of playful synonyms for penis.

20. He crushed intelligent design before anyone even thought of it: His studies of river erosion convinced him that the Earth is much older than the Bible implies, and he argued that falling sea levels—not Noah's Flood—left marine fossils on mountains.