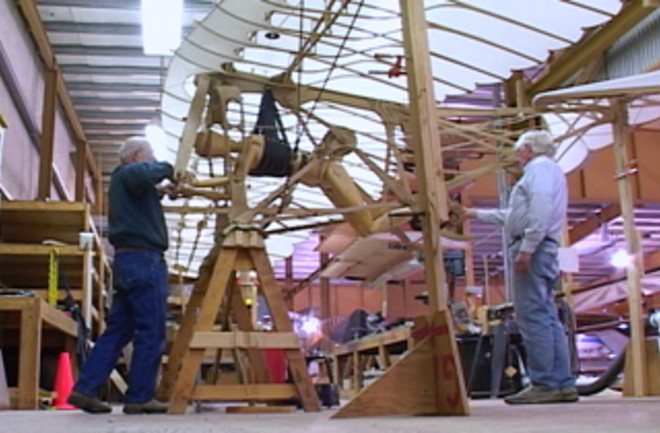 For thousands of years, man dreamt of flying, and one of the biggest dreamers was Leonardo da Vinci. Five hundred years ago he studied and dissected birds, trying to find the secret of flight. He made notes, and initial drawings, but that is as far as he went.

Two Seattle area men chose to finish the job, building a full size flying machine with flapping wings. Today such things are called ornithopters. While others before had created models based upon the drawings, retired engineer Sandy McLaughlin and retired schoolteacher John Grove wanted to add the detail that da Vinci might have done. McLaughlin explained he wanted, "to try and do what he (da Vinci) could have done if he kept working on aviation."

To do that, McLaughlin says he "read a whole bunch of translations, mostly from the Codex Atlanticus, which is a collection of his writings."

Grove said their idea was to do things the way da Vinci might. He said, "We were always conscious of trying to look at it through 16th century eyes, and put ourselves back through that perspective." Added McLaughlin, "There are no nuts and bolts. There's no space age fasteners or bearings or anything like that. It's all put together with rawhide lashings and dowels to hold the parts together."

The men worked on the project for three years. They said the hardest part was the wing support structure. Grove said "we were breaking things" before the wing structure came together.

McLaughlin concedes that trying to finish da Vinci's work was, "a little presumptuous, I guess." But he added, "We just sort of decided that's what we were going to do." Grove added the work gave them a better understanding of da Vinci's genius, noting, "When you walk back through those footsteps, it's really kind of a challenging thing."

They never intended that anyone should ever actually try to fly the machine. McLaughlin said people are not strong enough, adding that a really strong person, "might be able to flap the wings once." He did speculate it might be possible to fly it as a glider.

Instead, the flying machine hangs in the Seattle Museum of Flight, part of their exhibit of man's early attempts at flight.