The Dream: Print-Out Solar Panels That Can Be Stapled to Your Roof 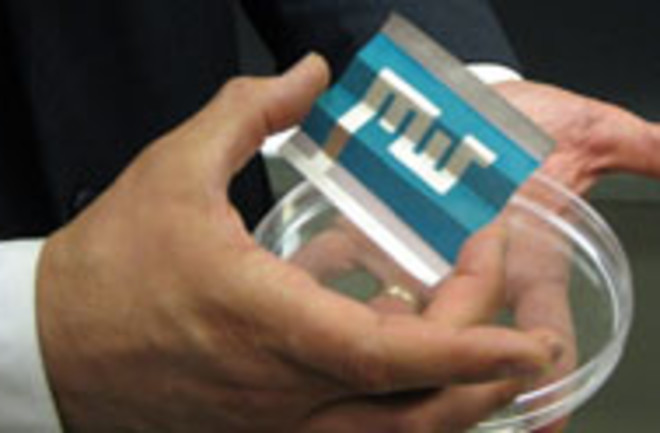 Who needs big silicon panels? MIT scientists just coated paper with solar cells, reportedly the first team to ever do that. Vladimir Bulovic, director of the Eni-MIT Solar Frontiers Research Center, unveiled them this week, and said the design was being submitted for peer review.

The printed solar cells, which Bulovic showed at a press conference Tuesday, are still in the research phase and are years from being commercialized. However, the technique, in which paper is coated with organic semiconductor material using a process similar to an inkjet printer, is a promising way to lower the weight of solar panels. "If you could use a staple gun to install a solar panel, there could be a lot of value," Bulovic said [CNN].

Right now the solar cells on paper get just 1 to 2 percent efficiency at converting sunlight to electricity (some cells have achieved 40 percent or more in lab trials). But they carry the advantages of being flexible, and Bulovic says he could potentially use a number of different materials, not just the carbon-based dye used in these first attempts. And they're tunable:

MIT is focusing much of its effort on quantum dots, or tiny crystals that are only a few nanometers in size. A human hair is about 50,000 to 100,000 nanometers thick. By using different materials and sizes, researchers can fine-tune the colors of light that quantum dots can absorb, a way of isolating good candidates for quantum dot solar cells [CNN].

Bulovic gives the standard warning about new technologies—it could be a decade before it's ready for commercial development.

And once it is? There’s no telling how it could revolutionize the home solar industry, which currently relies on pricey professional installers to set up panels [Inhabitat].

80beats: Glitter-Sized Solar Cells Could Be Woven into Your Power Tie