Glitter-Sized Solar Cells Could Be Woven Into Your Power Tie 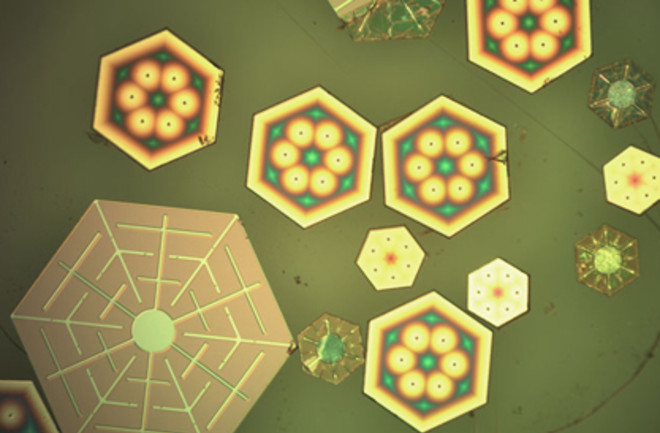 The newest big thing in solar power is a set of solar panels so small that they could be mistaken for specks of glitter.

Researchers at Sandia National Laboratories have produced “microcells” that are thinner than a human hair, which are made from crystalline silicon and use 100 times less material to generate the same amount of electricity as standard solar cells made from 6-inch square solar wafers [Inhabitat].

What’s more, the tiny solar cells could be attached to flexible materials like plastic or cloth, letting inventors dream of a solar power tie that could recharge your cell phone, or a tent that could run electric lights at night.

Says lead researcher Greg Nielson: “With this technology, one can envision ubiquitous [solar-powered] devices.” … In the lab, these hexagonal microcells have achieved photovoltaic efficiencies of about 15 percent, denoting the percentage of light shone on them that is converted into harvestable electricity. High-end commercial-grade solar cells can reap about 20 percent currently, though Nielson thinks the microcells can more than match this [LiveScience].

Even though the tiny solar panels are made of relatively expensive silicon rather than the cheaper materials being used in emerging thin film solar technologies, researchers say that mass-production of the microcells should keep costs low.