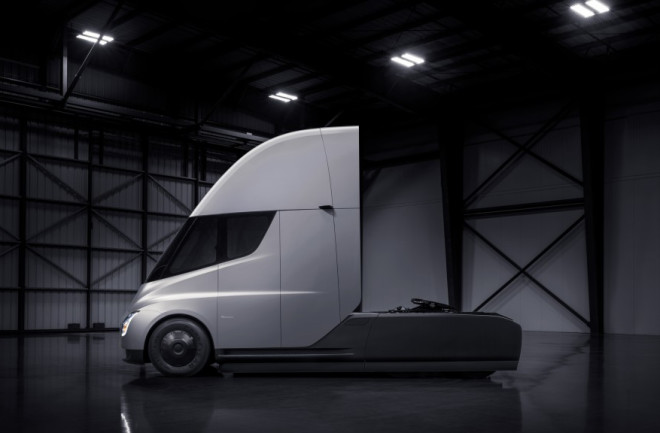 (Credit: Tesla) Elon Musk finally revealed the Tesla Semi, an electric big-rig he professes will outstrip the diesel fleets that have dominated American freight for decades. The Tesla CEO flaunted his latest creation and its “BAMF performance”—it’s a technical term, he says—at an unveiling ceremony Thursday night in Hawthorne, CA. He outlined the semi’s specs, which include parlor tricks like going from 0-60 mph in 5 seconds and potentially industry-upending figures for driving range and cost of operation. “It’s incomparably better than any other truck on the road,” he said.

With the semi, Musk aims to bring sustainable energy to an industry that accounts for about 20 percent of the United States’ greenhouse gas emissions in the transportation sector. It’s Tesla’s latest push to permeate the major areas of transportation. Though he didn’t mention a price, Musk said the semi will go to production in 2019. The year after that, he announced in a last-minute plot twist, Tesla will begin building a new $200,000 Roadster, which he called “the fastest production car ever made, period.” Musk emphasized the numerous firsts for the car—first to break 0-60 mph in under 2 seconds; first to clinch a quarter-mile in under 9 seconds. The four-seater convertible will top out at over 250 mph with a 620-mile range. As for the semi, perhaps the most eye-catching feature for trucking companies is its range: It can travel 500 miles at highway speed while carrying 80,000 pounds, and a 30-minute charge time.

Tesla CEO Elon Musk says the new electric semi has "BAMF Performance"—we'll believe it when we see it. (Credit: Tesla) “The range he claims is astounding,” said Hani Mahmassani, who studies transportation at Northwestern University, “and exceeds most expectations by a long shot.” Because 80 percent of trucking routes are under 250 miles, Musk said, the semi could cater to regional needs, delivering loads and returning to a hub station without needing to recharge. Musk claimed the Tesla Semi would be 20 percent cheaper per mile than diesel trucks, an important point for an industry with slim profit margins. But, he said, “it gets way better.” When driving in a convoy, communicating with other Tesla Semis to move in tandem, the trucks undercut diesel by nearly half the cost per mile. And Musk didn’t stop there. “This beats rail,” he said. “That is, I think, really profound.” The electric semi is powered by a massive battery stored in the floor pan, which runs four independent motors on the rear wheels. But it can operate on just two, with no transmission and no gears. Musk even guaranteed the drivetrain for a million miles. He also promised improvements in safety, including emergency braking, automatic lane-keeping and autopilot in each semi. He said the motors can adjust the torque to each wheel to prevent jackknifing, “a trucker’s worst nightmare.” An aerodynamic build decreases the semi’s drag below that of high-end sports cars. The spacious cab is as futuristic as the exterior, and the truck can connect to Tesla’s app, which offers diagnostic management and location tracking.

An interior view of the Tesla Semi—so sleek. (Credit: Tesla)

Will it Really Change the Trucking Industry?

Notably, Musk did not mention the electric semi's weight. Nikola Motor Company, one of Tesla’s competitors in electric vehicles, tweeted that the semi’s battery would have to weigh between 10,000 and 12,000 pounds, which could affect payload. “That’s the big question,” said Glen Kedzie, vice president of the American Trucking Association’s Energy and Environmental Council. “To increase range, you have to have more batteries, and to have more batteries you run up against weight limitations.” Venkat Viswanathan, an assistant professor at Carnegie Mellon University, said he expects the Telsa Semi could carry between 16 and 22 tons, competitive with diesel fleets. For now, the trucks may be limited to competing in shorter hauls. Michael Hewitt, associate professor of information systems and supply chain management at Loyola University in, said he doubts the country’s interior—over which trucks drive billions of miles each year—could support the same robust charging infrastructure as California and the East Coast. "I don’t believe we have the capacity now to charge vehicles for that much driving," he said, "and it’s not clear how much government interest there is in building out that infrastructure." The unveiling coincides with Tesla’s struggles to build the Model 3, the company’s first venture into mass-production. Musk has so far failed to meet demand for the sedan, and a strict production schedule will be important in swaying the trucking industry toward his sem­i. If Tesla can offer an attractive range and cost, businesses are likely to welcome the greener alternative to diesel. J. B. Hunt Transport Services, Inc., one of America’s largest trucking companies, announced this morning it reserved “multiple” Tesla Semis. “But the proof is in the pudding,” Mahmassani said. “We'll have to wait and see if these claims are verified, and at what price this performance can be delivered.” Watch the unveiling of the Tesla Semi below: https://www.youtube.com/watch?v=s_8ToNr6p6o