Technology’s Signposts in the Hunt for Aliens 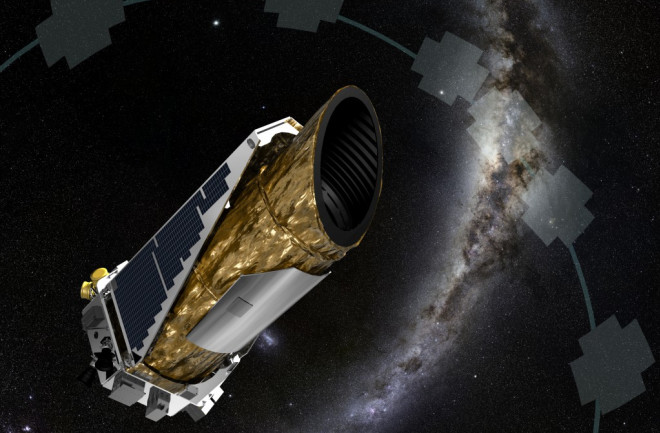 The artistic concept shows NASA's planet-hunting Kepler spacecraft operating in a new mission profile called K2. Using publicly available data, astronomers have confirmed K2's first exoplanet discovery proving Kepler can still find planets. Credit: NASA The popular "Star Wars" films envision a fictional galaxy teeming with alien civilizations that possess advanced technologies such as interstellar spaceship travel and energy weapons. In reality, humanity has barely begun crawling out of its space cradle and has yet to find any evidence of extraterrestrial civilizations. But the modern human experience based on rapid technological progress has created great expectations of discovering other intelligent life in the universe through their technological activities. Such expectations probably helped fuel the recent excitement over an unusual light pattern coming from KIC 8462852, a star located almost 1,500 light years away from Earth and one of more than 150,000 stars spotted by the former Kepler Space Telescope mission, according to The Atlantic. The irregular pattern seen in Kepler's data was first flagged by ordinary "citizen scientists" in 2011 and followed up on by professional astronomers. They concluded that the pattern seemed most consistent with a swarm of objects circling the star, but had trouble coming up with natural explanations for the pattern. One of the least likely theories has drawn the most public attention; the idea that the swarm consists of huge, planet-size artificial structures built by an alien civilization. The astronomers who wrote a paper about the possibility of KIC 8462852 representing evidence of advanced extraterrestrial engineering were careful to point out that the aliens explanation remains a very remote possibility: “Most such signals will, presumably, be natural, and represent unexpected or extremely unlikely phenomena—alien megastructures should be an explanation of last resort." Still, the star was considered worthy of special attention from the Allen Telescope Array belonging to the Search for Extraterrestrial Intelligence (SETI) Institute.

To Seek Out New Life

Expectations for finding technologically advanced aliens don't stop there. In July, Russian billionaire Yuri Milner committed an unprecedented $100 million to the Breakthrough Initiatives in the search for extraterrestrial life. The huge effort aims to survey one million stars over the next decade, but would also try to detect radio or laser signals beamed from nearby stars. Ground-based telescopes could even theoretically detect more powerful radio signals sent from the center of our Milky Way galaxy. But it's not a given that aliens would necessarily become space explorers and look to the stars for signs of other intelligent life, said Lucianne Walkowicz, an astronomer at the Adler Planetarium in Chicago. A lack of technological capability or interest in actively broadcasting powerful signals might make them effectively invisible to many human efforts to find them. Nor it a given that an advanced alien civilization would venture into space. "Being a spacefaring civilization is a cultural value," Walkowicz explained. "It’s very energy intensive to do things like space exploration, so it has to be a widely held priority." I talked with Walkowicz on the phone not long after she had participated in a panel titled "Are We Alone and Have We Been?" at a U.S. Defense Advanced Research Projects Agency (DARPA) technology conference in September. During the panel, she used the example of "hyper intelligent space dolphins" to describe the possibility of intelligent life that might not crawl up on land and look to the stars. Such aliens might never develop a concept of astronomy, create technologies for signaling through planetary atmospheres, or build any artificial megastructures. (My conversation with Walkowicz occurred before the recent buzz over KIC 8462852.) https://www.youtube.com/watch?v=5LqlwNUu580

The Silence of Alien Civilizations

Another challenge comes from the fact that technological civilizations don't necessarily get "louder" in terms of the detectable signals they send into space. In Earth's case, humanity spent a number of decades relying heavily on radio signals for communication. An alien civilization could theoretically detect such signals even though they were originally intended for people on Earth. The same line of logic could theoretically help Earth detect alien civilizations. But more recently, Earth has gone from being "radio loud" to more "radio quiet" because much communication has shifted to digital signals sent through fiberoptic cables, Walkowicz pointed out. That means an alien civilization would have a relatively short window of opportunity during Earth's history to listen for humanity's radio signals. Turn that scenario around, and you can see why humanity's chances of detecting the signals leaking from an alien civilization might not necessarily be amazing. Still, the first big barrier currently preventing humanity from finding tech-savvy, intelligent aliens comes from lack of effort. SETI's efforts have always been fairly modest. Most big ground or space telescopes are devoted to more pragmatic scientific research with a "demonstrable, dependable outcome," Walkowicz said; a hunt for theoretical alien life living around a distant star is usually anything but that. On the bright side, humanity already has the technological tools to pick up on any potential signs of life in the universe. And the recent $100-million funding of the Breakthrough Initiatives may help sharpen some of those tools and point them in the most promising directions. "The thing people don’t realize is that we don’t need to make big technological advances to find life in the universe," Walkowicz said. "We have all the technology we need to find life in the universe; we just have limited ability to deploy it."