No Dyson Spheres Found Yet 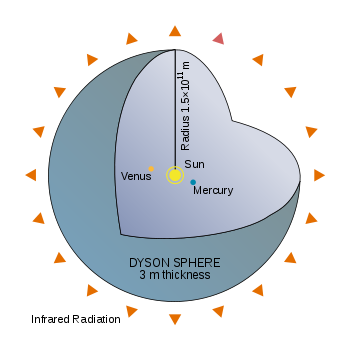 In 1960, Freeman Dyson proposed an audacious form that future technology might take: the Dyson Sphere. It's a simple idea, once you stop thinking in terms of "I wonder how that could be done?" and start thinking along the lines of "I wonder what is physically possible?" Dyson reasoned that an efficient civilization wouldn't want all of the valuable energy from its home star to fly uselessly into outer space, so they would try to capture it. The solution is then obvious: a sphere of matter that encircles the entire star. It's worth quoting a bit from Dyson's original paper:

The material factors which ultimately limit the expansion of a technically advanced species are the supply of matter and the supply of energy. At present the material resources being exploited by the human species are roughly limited to the biosphere of the earth, a mass of the order of 5 x 10^19 grams. Our present energy supply may be generously estimated at 10^20 ergs per second. The quantities of matter and energy which might conceivably become accessible to us within the solar system are 2 x 10^30 grams (the mass of Jupiter) and 4 x 10^33 ergs per second (the total energy output of the sun). The reader may well ask in what sense can anyone speak of the mass of Jupiter or the total radiation from the sun as being accessible to exploitation. The following argument is intended to show that an exploitation of this magnitude is not absurd. First of all, the time required for an expansion of population and industry by a factor of 10^12 is quite short, say 3000 years if an average growth rate of 1 percent per year is maintained. Second, the energy required to disassemble and rearrange a planet the size of Jupiter is about 10^44 ergs, equal to the energy radiated by the sun in 800 years. Third, the mass of Jupiter, if distributed in a spherical shell revolving around the sun at twice the Earth's distance from it, would have a thickness such that the mass is 200 grams per square centimeter of surface area (2 to 3 meters, depending on the density). A shell of this thickness could be made comfortably habitable, and could contain all the machinery required for exploiting the solar radiation falling onto it from the inside.

Old news, right. What I hadn't realized is that there is something called the Fermilab Dyson Sphere search program, led by Richard Carrigan, which recently updated its results (summarized in the title of this post). A star like the Sun radiates something pretty close to a blackbody spectrum; but if you capture all of the energy in the Sun's radiation, and then re-radiate it from a much larger sphere (e.g. one astronomical unit in radius), it comes out at a much lower temperature -- a few hundred Kelvin. Dyson therefore proposed a search strategy, looking for blackbody objects radiating in the far infrared, around 10 microns in wavelength. And the search is now going on! Indeed, Carrigan's most recent results were just released on astro-ph a few weeks ago:

IRAS-based whole-sky upper limit on Dyson Spheres Authors: Richard A. Carrigan Jr Abstract: A Dyson Sphere is a hypothetical construct of a star purposely cloaked by a thick swarm of broken-up planetary material to better utilize all of the stellar energy. A clean Dyson Sphere identification would give a significant signature for intelligence at work. A search for Dyson Spheres has been carried out using the 250,000 source database of the IRAS infrared satellite which covered 96% of the sky. The search has used the Calgary data collection of the IRAS Low Resolution Spectrometer (LRS) to look for fits to blackbody spectra. Searches have been conducted for both pure (fully cloaked) and partial Dyson Spheres in the blackbody temperature region 100 < T < 600 deg K. Other stellar signatures that resemble a Dyson Sphere are reviewed. When these signatures are used to eliminate sources that mimic Dyson Spheres very few candidates remain and even these are ambiguous. Upper limits are presented for both pure and partial Dyson Spheres. The sensitivity of the LRS was enough to find solar-sized Dyson Spheres out to 300 pc, a reach that encompasses a million solar- type stars.

It's too bad the search has thus far not turned up too many promising candidates. The Fermi Paradox continues to be paradoxical. One famous account of the first contact between an extraterrestrial civilization and the human race was told in the classic 1951 Robert Wise film, The Day the Earth Stood Still. It's now been remade by director Scott Derrickson, starring Keanu Reeves as the alien Klaatu, and will open next Friday. In the emerging spirit of science and entertainment exchanges, there will be a panel discussion at Caltech's Beckman Auditorium this Friday (the 5th) with Derrickson and Reeves holding up the Hollywood side of things, and roboticist Joel Burdick and I holding up the science end. Don't quote me on this, but I think it's at 6:00, and the movie will be screened before the panel. Should be fun.