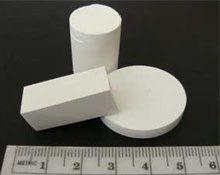 Researchers have created a strong, light-weight ceramic inspired by the composition of seashells, and say their new material could one day replace the aluminum alloys used in aerospace engineering. A seashell may seem like a fragile thing, but the iridescent mother-of-pearl coating on the inside of many shells has surprising toughness.

Natural mother-of-pearl, also known as nacre, has a brick-and-mortar structure: Layers of "bricks" made from a calcium carbonate mineral are held together by thin films of a biopolymer "mortar" such as chitin [Chemical & Engineering News].

Researchers have tried to mimic this brick-and-mortar structure for years, but

Now, researchers have come up with an ingenious way to produce a synthetic in large chunks, and say the material is both strong and resistant to fracture. In the journal Science [subscription required] researchers explain that they first organize aluminum oxide plates (the "bricks") by freezing them in ice in

a method called 'ice-templating'. Aluminium oxide plates are first suspended in water, which is then carefully frozen to produce a ceramic 'freeze-cast' with the plates in a regular structure [Chemistry World].

Researchers then freeze-dry the assembly to make the water ice sublimate away (at low pressure and increased temperature, the ice changes directly from a solid to a gas), and insert a gluey polymer in the spaces between the plates. That polymer serves as a cushioning "mortar," and prevents the material from being brittle like household ceramics. The

polymer permits the brick-like layers to slide over one another when stressed, making the material resistant to fractures [Technology Review].

Off the tops of their heads, the researchers list a few potential applications for the substance: It could be used for car frames, strong and insulating building materials, or bulletproof vests.

Ritchie is also confident that the composites will be cheap to make, as the components ... are all readily available. However, it may be some time before the material finds practical applications, he notes, as new materials have to undergo rigorous testing procedures [Chemistry World].