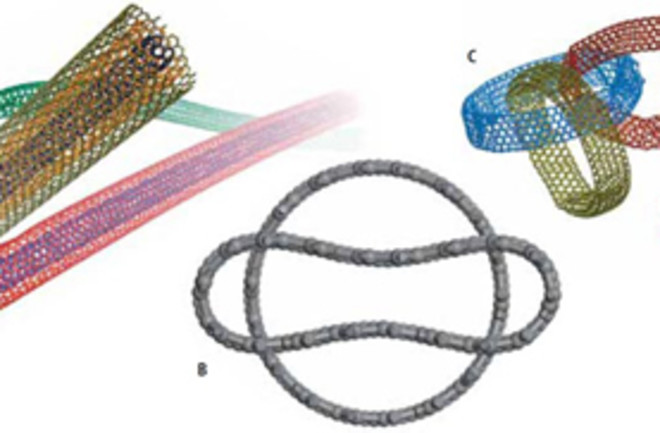 Now and then we stop to marvel at the feats of carbon nanotube researchers, who use these infinitesimal tubes to build materials of adamantine strength and impressive electrical conductivity. But what if you could marry the robustness of nanotubes to the stretchiness of viscous liquids? You'd be Xu Ming and his fellow Japan-based scientists, who have creating a super rubber that—unlike normal rubber—does not crack and fall apart at extreme temperatures. Xu's team outlines its creation in a study for this week's edition of the journal Science.

Made entirely of carbon, it can flow and stretch slowly like thick honey and spring back to its original form, said [Xu]."It looks like a metal sponge that is porous, it is made from trillions of entangled carbon nanotubes," she said in a telephone interview. "When you stretch and release it, it can come back slowly (to its original shape)." [ABC News]

The material's litany of talents—especially its ability to keep its shape up to temperatures of 1000 degrees C (1832 Fahrenheit) and down to -196 C (-321 F)—inspires visions of using it in all kinds of extreme conditions.

That huge range of temperatures means the new material could be used in everything from spacecraft to car shock absorbers, said Roderic Lakes, a scientist at the University of Wisconsin who studies viscoelastic materials. Spacecraft equipped with this material could withstand the intense cold of [Saturn]'s largest moon, Titan, said Gogotsi, or the heat of the sun in space, said Lakes. [Discovery News]

To build such a material, the researchers start with silicon, upon which they put metal catalysts.

These catalysts act as seeds for growing the nanotubes from a carbon source, such as ethylene. A drop of water (100–200 ppm) added to the mix greatly increases carbon nanotube growth and produces long tubes. The carbon nanotubes normally just grow upwards using such a technique, but by pre-treating the catalyst, the researchers succeeded in lowering the density of the tubes to create an entangled network of long tubes as growth progresses – similar to vines in a jungle, says Xu. [Physics World]

, of course, is experimental and far from commercial development. But this type of stretchy material, in less advanced versions, is already used widely:

Viscoelastic materials behave like thick liquids (for example, honey) but are also reversibly elastic, like rubber bands. One example of such a material is polymer foam – widely used in earplugs that adapt themselves to the shape of your ear yet recover their original form after they are removed. Viscoelasticity is seen in a variety of materials, including amorphous and semicrystalline polymers, some biomaterials, crystals and even some metallic alloys. [Physics World]