Nanotubes have been billed as the key to curing cancer, building space elevators, and creating real-world Spidermen. Whether they're totally tubular or just an overhyped pipe dream remains to be seen. 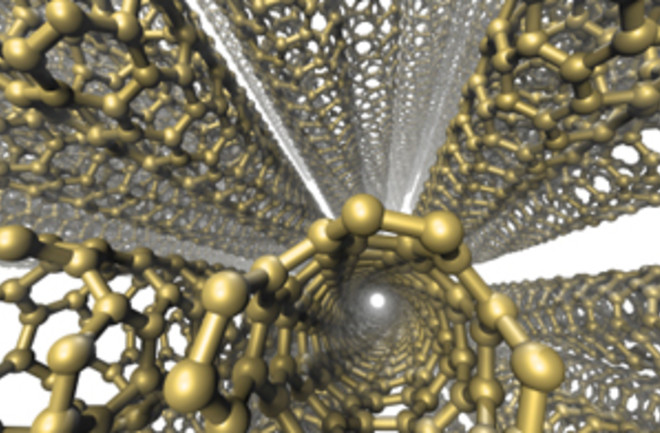 Oh carbon nanotubes, is there anything you can't do?

Nanotubes can be envisioned as one-atom thick sheets of carbon that have been rolled into tubes. Researchers know that when things get that small, they act a little weird, and labs around the world are now racing to capitalize on nanotubes' strange properties. With their extraordinary strength and fascinating knack for conducting electricity and heat, nanotubes are finding applications in everything from cancer treatments to hydrogen cars. These structures of carbon may be tiny—a nanotube's diameter is about 10,000 times smaller than a human hair—but their impact on science and technology has been enormous.

Here, we count down nine of the most enticing possibilities for these giants on the Lilliputian stage. They probably won't all pan out, but if nanotubes fulfill just a few of these predictions, they'll be worth the buzz.

9. X-traordinary X-rays A new nanotube-based imaging system could take sharper, faster pictures that trump today's X-rays and CT scans. Researchers from the University of North Carolina say their device will be especially useful for imaging organs that are perpetually in motion, like the heart and lungs.

In a traditional X-ray machine, a filament emits electrons when it is heated above a certain threshold, and those electrons fly through the body and hit a metal electrode on the other side, creating images; CT scans produce three-dimensional images by rotating the electron source. But the new system uses an array of carbon nanotubes that emit hundreds of electrons simultaneously as soon as voltage is applied to them. The system is faster than a regular X-ray machine because there are no filaments to warm up, and the multiple nanotube emitters can also take pictures from many different angles without moving.

8. Helping the Hydrogen Car Cars powered by hydrogen fuel cells have been a clean energy dream for years, but they've been held back largely by the expense of making fuel cells. The Department of Energy estimates that half of a fuel cell's price tag comes from the platinum catalyst used to speed up the reaction that produces energy. But in February a team of researchers found that bundles of carbon nanotubes doped with nitrogen form a more efficient and more compact catalyst.

While carbon nanotubes are currently fairly expensive to produce, researchers note that the price has been plummeting. Researchers from the University of Dayton, Ohio note that nanotube production costs have fallen 100-fold since 1990, while no such price reductions are likely with platinum, a limited natural resource.

7. Diagnosis Via Nanotube Spanish researchers say nanotubes can even help with an embarrassing medical problem, and have created a biosensor that can diagnose yeast infections (the irritating fungal infections that can take hold on the genitals). The scientists say their gadget provides a quicker diagnosis that today's typical method, in which a cell sample is taken and cultured in the lab to look for the presence of the Candida albicans fungus.

The researchers built a transistor that contains carbon nanotubes and antibodies programmed to attack the Candida yeast cells. When a cell sample is put on the biosensor, the interaction between the yeast and the antibodies changes the electric current of the device. The extremely conductive nanotubes record the change and allow researchers to measure how much yeast is present.

6. The Smallest Chips in the Land Nanotubes could even spell the end of a building block of our modern world: the silicon-based computer chip. Several research groups have found ways to "unzip" carbon nanotubes to produce atom-thick ribbons of graphene. Like silicon, graphene is a semiconductor, but the nano-sized ribbons could be used to pack much more processing power on every computer chip.

Researchers have made graphene ribbons before, but never as easily—previously the ribbons were cut from larger graphene sheets, which offered little control over their size and shape. In contrast, unzipping nanotubes is a precise process. One research group first stuck the nanotubes to a polymer film, then used argon gas to etch away a strip from each tube to produce the nanoribbons.

5. Turn It Up! The next application could make for a noisier world: Chinese researchers have found a way to make flexible, paper-thin loudspeakers out of nanotube sheets. The scientists say the technology could be used to add an auditory dimension to anything from clothing to magazines—and to prove their point, they put one on a waving flag.

The nanospeakers don't generate sound like conventional speakers, which make noise by vibrating the surrounding air molecules. Instead, they harness a phenomenon called the thermoacoustic effect, which is how lightning produces thunder. When an electric current runs through the nanotube sheets, they heat and expand the air near them, creating sound waves.

4. Taking Lessons from the Gecko Real-world Spidermen could one day scamper up walls thanks to an adhesive made of carbon nanotubes. The substance mimics the design of gecko feet, which are covered in millions of tiny hairs that each end in a profusion of spatula-shaped tips. The lizards can defy gravity and walk up sheer surfaces because when those tiny tips are close to a surface, they induce a strong attractive force that operates on the atomic scale, known as the van der Waals force.

The nanotech version of this system is a glue that is ten times stickier than the gecko's feet. Researchers made arrays of vertically aligned nanotubes that were topped with shorter nanotube bits, like branching treetops. The adhesive worked on a variety of surfaces, including slick glass and rough sandpaper, but its hold could easily be broken by those who knew the trick. Just like a gecko lifting its foot away from the wall, researchers pulled the glue pad away at a 90-degree angle so that only the tips of the branching nanotube bits were touching the surface, and it easily came away.

3. Flexible, Bendable Electronics Imagine a computer screen that could be bent, folded in half, and even crumpled like a sheet of newspaper, without affecting its function in the slightest. Researchers at the University of Tokyo took a step in that direction in May when they constructed a display made of organic light-emitting diodes (OLEDs) paired with a rubbery, nanotube-based conductor.

The organic compounds in an OLED system emit light when an electric current is passed through them, and they need no backlight, making them thinner than traditional displays. As nanotubes are natural semiconductors, they channel the electricity to the organic compounds. Researchers can envision enough technological applications to fill a World's Fair, including everything from food packages with interactive displays to artificial skin for robots and coatings for airplanes that would check the craft for wear and tear.

Low-cost, large-scale fabrication could be around the corner: The researchers used a cheap industrial printing process to deposit the nanotubes on a rubbery surface.

2. Space Elevator, Going Up Carbon nanotubes are renowned for their superior strength, and in March researchers from the University of Texas manipulated that property to create a material that is simultaneously strong, stretchy, and nearly as light as air. The researchers made an aerogel (a low-density solid) out of nanotubes, and found that in was as strong as steel. Meanwhile, applying voltage to the material made it stretchier than rubber.

What possible uses could the world find for such a material? One idea is to fashion nanotube ropes to act as cables for a space elevator, which could lift astronauts, cargo, or even tourists into orbit. The 62,000-mile-long cables would have to be strong and flexible so they wouldn't break when buffeted by atmospheric storms and space debris, but light enough so they wouldn't collapse under their own weight.

1. Tumor Blitz The tiny tubes could even end up as must-haves in cancer hospitals one day. In a recent study, researchers injected carbon nanotubes into kidney tumors in mice, and then directed a near-infrared laser at the tumors. The tubes responded to the laser blast by vibrating, which created enough heat to kill surrounding tumor cells.

In the group that received the highest dose of nanotubes followed by a 30-second laser treatment, the tumors shrank and completely disappeared in 80 percent of the mice. The procedure didn't appear to damage the animals’ internal organs, and left only a slight burn on the skin. But researchers haven't yet proven that nanotubes are safe and non-toxic, and say that much more research must be done before such procedures are ready to be tested in humans.