One company's special manufacturing process turns out yarns and sheets millions of time the size of normal nanotubes. 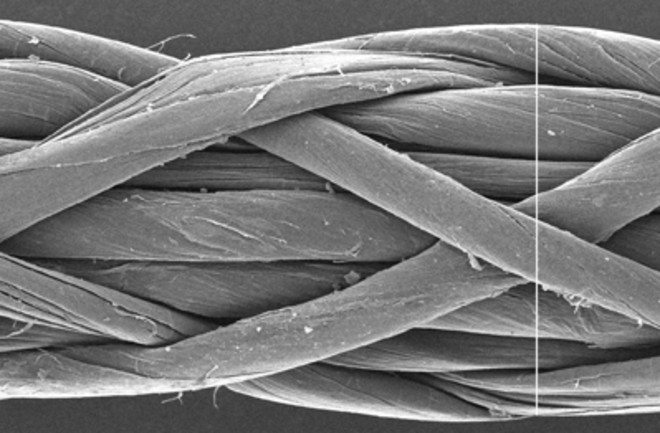 When carbon nanotubes entered the spotlight in 1991, visionaries and futurists had a field day. The structural, thermal, and electrical properties of these cylinder-shaped carbon molecules meant that, in theory, they could be used to build incredibly strong structures, such as a space elevator that would stretch 62,000 miles from Earth, or incredibly compact and fast digital computers. In practice, however, it has been tough to mass-produce nanotubes that are long enough for engineers to do any such amazing things. Now Nanocomp Technologies, based in Concord, New Hampshire, is trying to bring the future closer by producing, in bulk, yarns and sheets made from carbon nanotubes.

On an atomic level, carbon nanotubes look like rolled-up tubes of chicken wire—only instead of metal, the tube is made from a hexagonal lattice of carbon atoms. Each tube is about one nanometer (one billionth of a meter) in diameter, hence the name. Today nanotubes are commonly produced in segments about 10,000 nanometers long, forming a black powder. This powder exhibits only a small fraction of the useful properties of nanotubes. Nanocomp says it can produce nanotubes that are tens to hundreds of times as long, forming carbon yarns and sheets (yarns up to one kilometer in length, with a tensile strength better than steel, and sheets made in 18-square-foot sections).

Nanocomp is using these materials to make lightweight antennas, cables, and electromagnetic interference shields for the military and aerospace markets, where the weight saving may lead to longer-range airplanes, for instance. Nanocomp is also working with the Office of Naval Research and the U.S. Army’s Natick Soldier Center to develop better body armor.

The heart of Nanocomp Technologies’ manufacturing process is a long, cylindrical furnace. A reaction gas containing a carbon-based feedstock—the raw material—is fed into one end of the furnace. The gas is swept along the furnace until it meets a heated, porous block that is coated with a catalyst. As it squeezes through the pores, the gas is forced into contact with the catalyst, and carbon nanotubes begin to form. A temperature gradient between the porous block and the open end of the furnace supports the tubes as they grow, absorbing material from the reaction gas. Eventually the nanotubes leave the cylindrical furnace, looking like a wispy, black mass of tube-shaped cotton candy. A rotating anchor or conveyor belt captures the nanotubes as they emerge, turning them into yarns and sheets.