Scientists Clone a Mouse From the Deep Freeze; Woolly Mammoths Could Be Next 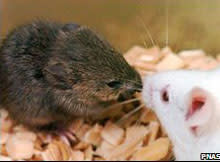 In a big step forward for cloning research, scientists have produced healthy clones of mice that were dead and frozen for 16 years. Researchers say the new technique could allow conservationists to freeze tissue from endangered species, which could then be used to produce clones if those species become extinct.

The finding also raises hopes of one day being able to resurrect extinct animals frozen in permafrost, such as the woolly mammoth, says [lead researcher] Teruhiko Wakayama.... "It would be very difficult, but our work suggests that it is no longer science fiction," he says [New Scientist].

Researchers have previously produced clones from frozen animal tissue, but only from specimens that were preserved with special chemicals to protect cells from damage during the deep freeze. In this study, published in the Proceedings of the National Academy of Sciences [subscription required], no such special precautions were taken when the mice were stowed in a freezer 16 years ago.

Many zoos are not in a position to collect cells and freeze them in such a way as to preserve their viability, says [cloning expert] Robert Lanza ... but they can put a dead animal "in a plastic bag and throw it in the freezer", he adds. "With a kitchen freezer you could store the genetic diversity of every panda in existence" [New Scientist].

Frozen cells are difficult to work with because the cells have often burst, and the DNA is often damaged by ice crystals. But Wakayama's team found that the mice's brain cells had suffered less damage.

The researchers injected the nuclei from the dead cells directly into unfertilized mice eggs, creating embryos. It's not known, however, whether nuclei from cells frozen for extended periods of time can be reprogrammed to develop into cloned animals. So ... the researchers extracted the inner cell mass from each embryo and generated lines of embryonic stem cells [National Geographic News].

Researchers then injected nuclei from those stem cells into new mouse eggs and implanted those eggs in living mice, eventually producing 13 healthy pups. Bringing back endangered or extinct species may not be the most extreme application of this new technology; experts say it also opens the theoretical possibility of creating clones of cryogenically frozen humans. Says cloning and stem cell expert John Gearhart:

"There is hope in bringing Ted Williams back, after all." ... The family of Williams, the Boston Red Sox hitter, had his body frozen by cryogenics firm Alcor after he died in 2002. Gearhart was only half-joking and said the study "may now stimulate the small industry of freezing parts of us before we die to bring us back in the future" [Reuters].