The high-tech, high-controversy attempt to save endangered animals with clones and surrogate moms

The tabby crouched on the cage's platform is fiercely attentive, as if he's not sure whether he's the hunter or the hunted. Something's different about this cat: His big blue eyes are a little too close together, his nose a bit long, and his limbs on the rangy side— even for a tom. Among the dozens of friendly felines romping in a nearby corridor, this one stands out, as nervous and haughty as the last cat on Earth. 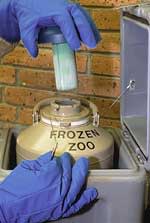 This canister, chilled to -372 degrees Fahrenheit, contains sperm and embryos, as well as samples of tissue and skin, of many different species.Photograph Courtesy of Audubon Nature Institute

Actually, Jazz is the first of his kind, an endangered African wildcat born almost two years ago from a frozen embryo that was implanted in an ordinary house cat. Acting as midwife was Betsy Dresser, director of the Audubon Center for Research of Endangered Species, on the bayou near New Orleans. Dresser is a leading advocate of efforts to protect rare animals by cloning and other advanced reproductive techniques. Her controversial aim is to provide a last-ditch, high-tech redoubt for species that might otherwise vanish when their habitats do.

"We're a safety net for these species," explains Dresser. "I feel like I'm in the emergency room of the conservation movement."

Some conservationists say that such singular feats of assisted reproduction are unlikely to yield meaningful results for species survival. But no one disputes the fact that Dresser's compound is ground zero for such feats or that her new wildcat is the most conspicuous example yet. Jazz began as a twinkle in Dresser's eye back in the 1980s, when she first began considering the concept of frozen zoos— collections of sperm, embryos, and tissue samples from imperiled animals stored in tanks of liquid nitrogen. With technological advances, the frozen cells might someday be used to re-create populations of species that face extinction. Dresser knew that in order to effect such recoveries biologists would have to get humble surrogates to gestate embryos of exotic species. Using mothers of the endangered species could be impractical, if not impossible. The advantage of using surrogate mothers is that "you'd be able to make more babies because you're not using the endangered mothers themselves," she says.

The principle of interspecies surrogates was first demonstrated in the 1970s, when an Asian mouflon lamb was born to a domestic wool sheep. In the early 1980s, Dresser and her colleagues at the Cincinnati Zoo coaxed a rare African antelope called a bongo from a doe of a more plentiful species, the eland. A few years later, the Cincinnati team shepherded the birth of an endangered Asian ox called a gaur by a Holstein cow. In 1994, Dresser announced the live birth of a threatened Indian desert cat, delivered by a house cat that had been implanted with a fresh embryo. Jazz represents the next stage in Dresser's vision: living, purring proof that frozen embryos can remain viable after thawing and can develop normally in the womb of another species.

Because egg cells, unlike sperm, don't freeze well, Dresser needs fresh eggs to make her frozen embryos. But collecting fresh eggs or embryos from rare wild females is tricky, so scientists are developing a new cloning technology as an alternative. In ordinary cloning, the nucleus of an egg cell is replaced with the nucleus from a body cell of the animal to be cloned. 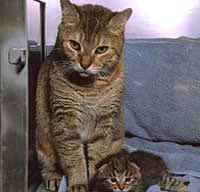 Implanting a frozen embryo of an African wildcat into the uterus of a house cat produced Jazz, shown with his surrogate mother.Photograph Courtesy of Audubon Nature Institute

A jolt of electricity then prompts the egg to begin dividing, after which it is implanted in a surrogate mother. To get around the problem of collecting eggs from endangered mothers, conservation cloning would have to involve two added twists: The egg cells, as well as the surrogate mothers, would be of a different species than the animal being cloned. Earlier this year, scientists at Advanced Cell Technology in Worcester, Massachusetts, announced the birth of the first such chimeric clone, a gaur calf that was produced from a skin-cell nucleus injected into the egg of, and nurtured in the womb of, an ordinary cow. The calf appeared healthy at birth but died from a bacterial infection two days later.

Meanwhile, Dresser's own attempts to clone bongos and wildcats in surrogate species have failed, and Chinese ventures to clone giant pandas are foundering as well. When scientists at Advanced Cell Technology cloned the gaur, they worked on 692 eggs to get one live birth.

That's not surprising, says David Wildt, head of reproductive sciences at the National Conservation and Research Center. Cloning and other assisted reproductive technologies won't save the panda or any other endangered species unless conservationists also develop detailed knowledge of each species' biology, he says.

"It's easier to highlight these one-shot wonders than it is to address the huge need for basic knowledge of the reproductive biology of endangered species," he says. For example, artificial insemination has become critical to the captive breeding of pandas, black-footed ferrets, and cheetahs, but only after years of research on the reproductive mechanisms unique to each animal. Success in one species doesn't translate easily to any other. Fifteen years ago, Wildt hoped he could quickly adapt the breeding methods that had become routine in cattle to cheetahs. "We learned that cheetahs are not cows," he says.

Wildt and other critics fear that cloning encourages a false sense of hope and complacency where immediate action is needed. "There's a total misperception about what these reproductive services can offer," he says. He worries that surrogate programs like Dresser's, which tend to focus on species that are related to such well-studied mammals as cows and cats, divert attention away from the most threatened species and the preservation of their habitats. "The point is that there's 40,000 vertebrate species out there being ignored." 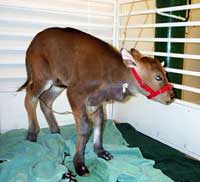 A gaur, an endangered species of ox, was cloned by slipping the nucleus from a cell of an adult gaur into a cow egg. The egg was then implanted in the cow's uterus. Photographs Courtesy of Advanced Cell Technology.

Dresser says that by working with domesticated species and their relatives now, she can expand the reach of the program later. She plans to take her techniques out of the Audubon Center compound to the field, implanting bongo embryos in wild eland in Kenya, for example, so the offspring will learn to fend for themselves in natural surroundings.

In the meantime, some members of the conservation community may become more accepting of the center's approach. In an April talk at the American Museum of Natural History, research scientist Phil Damiani of Advanced Cell Technology emphasized the potential of frozen zoos for preserving the diversity of a dwindling species' gene pool. Instead of a two-by-two Noah's ark approach, genome banks could store tissue samples from thousands of individuals of each species. "I had people coming up and saying, 'We never really looked at cloning in that respect,'" says Damiani. "They take a second look at it when they realize we're not talking about creating a genetic bottleneck."

But Dresser says that the idea of keeping a species alive in a nitrogen tank rather than in the wild will never be appealing. It's a grimly pragmatic solution to the problem of encroaching humanity— realpolitik for the biosphere. "Some people say, 'If this is the way we have to save them, then I'd rather they went extinct,' " she says. "I don't agree with that at all."

For more information about the Audubon Center for Research of Endangered Species and its conservation strategies, including background on their captive breeding programs, go to www.auduboninstitute.org/docs/care_aicres.html.

Read what biologist E. O. Wilson has to say about our vanishing ecosystem and how we can save it at www.time.com/time/reports/earthday2000/biodiversity01.html.