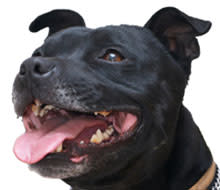 At the price of $50,000, a pit bull terrier named Booger has been cloned to produce five little baby Boogers, the South Korean biotech company RNL Bio announced yesterday. The first commercially cloned dogs were produced for client Bernann McKinney, a California screenwriter and former beauty queen who couldn't stand the loss of her beloved pit bull. McKinney was reportedly restored to great good humor at the sight of the five wriggling puppies.

"It's a miracle!" McKinney repeatedly shouted Tuesday when she saw the cloned Boogers at a Seoul National University laboratory. "Yes, I know you! You know me, too!" McKinney said joyfully, hugging the puppies, which were sleeping with one of their two surrogate mothers, both Korean mixed breed dogs [AP].

To create the clones, a number of skin cells were taken from Booger before he died of cancer in April 2006. The cells were then reprogrammed to act as embryos, which were implanted in two surrogate mothers. The RNL Bio team worked with South Korean scientists who used the same technique to create the first cloned dog, the Afghan hound Snuppy, in 2005.

Dogs are considered one of the more difficult mammals to clone because their reproductive cycle includes difficult-to-predict ovulations [Reuters].

McKinney says she was determined to clone Booger because the pit bull saved her from a savage attack by another one of the dogs, a mastiff, who McKinney says was temporarily crazed by an overdose of bee-sting medication.

He was chewing open her stomach when she said she called out, "Help me, God. Help me, Jesus. Help me, Booger," and the smaller dog succeeded in driving off the mastiff long enough for her to drag herself into the safety of her car [The Times].