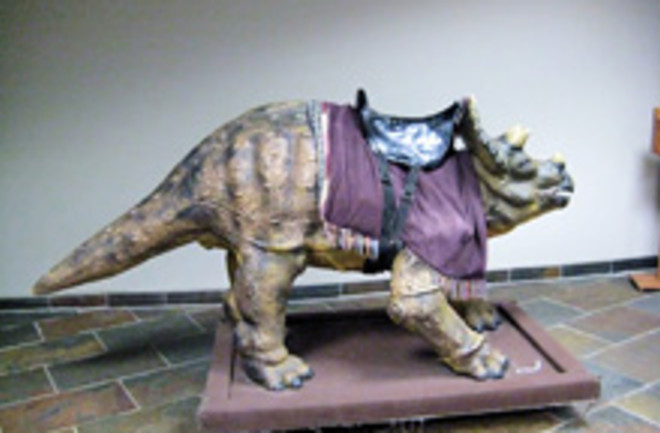 Internet slanders or no, Sarah Palin has reportedly spoken words demonstrating her dangerous lack of thought about evolution and education. Now it seems that Matt Damon's dinosaur question may be more than just a puffed-up Internet rumor as well. The L.A. Times has a source who claims to have spoken directly to Palin about dinosaurs in 1997, when she was mayor of Wasilla. Stephen Braun reports that the notoriously soundbite-ready VP nominee told Philip Munger, a music teacher at the University of Alaska in Anchorage, that "dinosaurs and humans walked the Earth at the same time" 6,000 years ago—an statement that's so horribly incorrect on so many levels, yet still all too common in creationist lore. Munger said Palin insisted that "she had seen pictures of human footprints inside the tracks." Were these pictures on display here by any chance? Granted, Munger is no fan of the photogenic governor: He writes the actively anti-Palin blog ProgressiveAlaska, and has appeared on ultra-liberal Air America radio to speak out against her. Still, unless yet another blogger digs up evidence that he's lying, there's no proof that their exchange is a myth. And, of course, all this could be cleared up by a simple Q&A with Palin herself—if such a thing was possible.