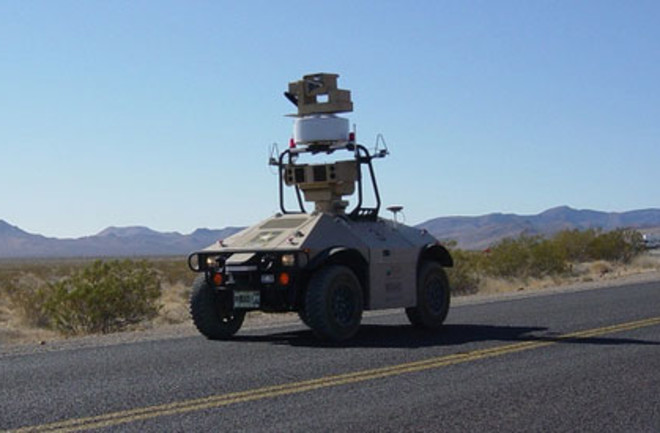 Who needs people to guard a nuclear weapons facility when you can build an autonomous robot to do it? Or, at least that's what the National Nuclear Security Administration (NNSA) was probably thinking when they ordered up three robo-tanks to take on the task of watching over the Nevada nuclear test site. The first of the robots, named the Mobile Detection Assessment Response System (MDARS), just started working, according to Wired's Danger Room, where we saw the story. Two more are scheduled to start their work in other remote locations on the Nevada National Security Site (NNSS, which is basically in the middle of the desert) within the next six months. The NNSA claims in its press release that the new system will save six million dollars in infrastructure and a million a year in personnel and maintenance:

“The robots are a great addition to the NNSS protective force,” said Brad Peterson, Chief and Associate Administrator for Defense Nuclear Security. “The robots allow us to improve security at remote portions of the Nevada National Security Site at reduced costs. Deploying MDARS robots at NNSS is another example of NNSA’s commitment to being effective stewards of taxpayers’ money.”

The diesel-fueled robots will watch out for intruders and check in with gates and locks around the facility using RFID tags; they can patrol for up to 16 hours at a time and reach speeds up to 20 miles per hour. Other iterations of the MDARS have been equipped with machine guns, paintball guns

. Their actions are monitored by a human operator, and if a bot identifies a potential threat--like a humanoid visitor wandering the premises--the operator can communicate through and manually control the robot to deal with the situation. Want one for yourself? Check out the brochure

(pdf). The Nevada National Security Site is the location of a thousand nuclear weapons tests that have left the site contaminated with tens of millions of cubic feet of low-level radioactive waste. The site spans 1,360 square miles with several remote sections that are difficult for humans to patrol, and the site is still used for various other projects, said Wired

Today, it boasts locations to conduct “controlled chemical releases in the open environment to simulate emissions from nuclear weapons production plants,” according to the NNSS website. And the place hosts the “Big Explosive Experimental Facility” — BEEF, for short. It’s “currently used for weapons physics experiments and shaped charge development.”

Check out the video below from NNSANews

80beats: The Upside of Nuclear Testing: Traceable Radioactivity in Our Heart Cells

80beats: Will the Pentagon Build the Jetsons’ Flying Car?