The Upside of Nuclear Testing: Traceable Radioactivity in Our Heart Cells 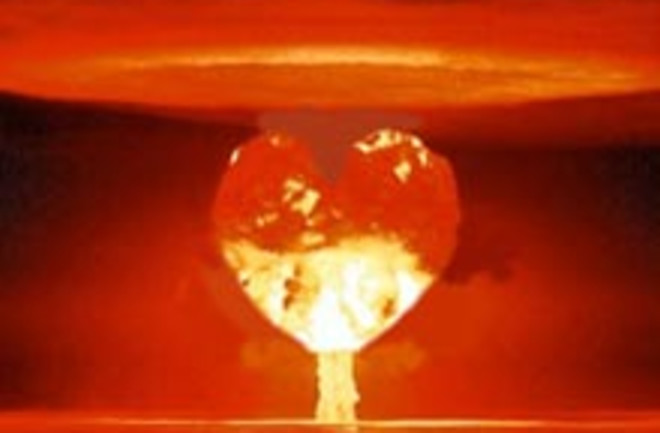 By tracing radioactive pollution created by the nuclear tests of the 1950s, researchers have settled the question of whether the human heart creates new cells during a person's lifespan.

“The dogma has always been that cell division in the heart pretty much stops after birth.... In medical school, we teach that you’ll die with the heart cells you’re born with” [Science News]

, comments cardiovascular expert Charles Murry. However, a new study has overturned this dogma, and found that the heart does regenerate, albeit slowly.

Cell turnover rates can easily be measured in animals by making their cells radioactive and seeing how fast they are replaced. Such an experiment, called pulse-labeling, could not ethically be done in people. But Dr. Frisen realized several years ago that nuclear weapons tested in the atmosphere until 1963 had in fact labeled the cells of the entire world’s population [The New York Times].

The Cold War tests produced a radioactive form of carbon called carbon-14, which was absorbed by plants and worked its way up the food chain; in humans, carbon-14 gets into the DNA of new cells and remains unchanged for the cells' lives. Once nuclear tests ended in 1963, levels of carbon-14 began to gradually decline.

, says lead researcher Jonas Frisén. His team found that people's hearts have cells that are younger than the people themselves, indicating that new cells have grown since birth. Heart experts say it's a remarkable use of the nuclear tests' impacts.

Using multiple samples, the researchers estimated that a 20-year-old person renews about one percent of heart muscle cells in a year. By age 75, the rate of cell turnover slows to about 0.4 percent a year [Science News].

The findings raise the tantalizing prospect of

While some heart researchers hope to use stem cells to patch up damaged hearts, goading the heart into producing new cells on its own might be an easier solution. Related Content: 80beats: Heart Failure Afflicts Surprising Number of Young African-Americans 80beats: Researchers Could Grow Replacement Tissue to Patch Broken Hearts 80beats: Researchers Grow a Blood Vessel Network From a Few “Progenitor” Cells DISCOVER: Can Stem Cells Save Dying Hearts?Image: Mattias Karlen