Are NFTs a democratizing force, or just another form of insider trading? 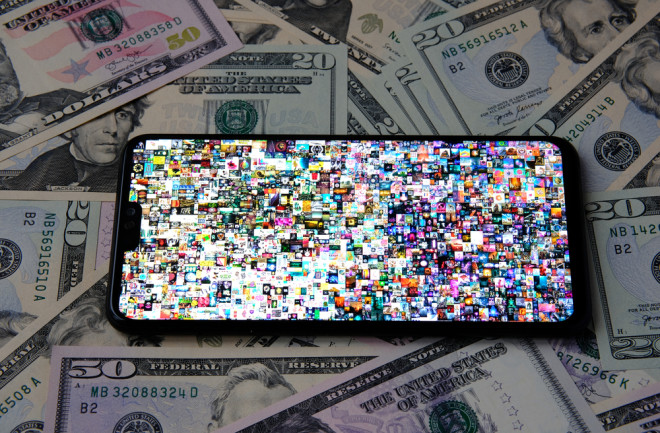 This past March, a psychedelic collage of 5,000 images created by digital artist Mike Winkelmann — more commonly known as Beeple — sold for more than $69 million. Or, to be more precise, a digital certificate of ownership, embedded with the artist's signature, sold for more than $69 million. This certificate, also known as a non-fungible token or NFT, does not contain an actual copy of the artwork in question (although the owner did receive a copy from Beeple himself). But, unlike a digital image, which can be copied and transferred from device to device innumerable times, an NFT is unique and inimitable.

Simply put, these tokens are the digital equivalent of engraving the information from a sales receipt onto a slab of granite and then posting the slab of granite on a busy city street so that anyone walking by can verify your ownership. NFTs live on a “blockchain,” which is basically a digital ledger, stored simultaneously on users' computers worldwide, that cannot be erased or altered.

Back in 2017, almost no one had heard of NFTs, aside from a small online community of cryptocurrency enthusiasts. But, at the end of that year, a collection of quirky graphic images of cats introduced the concept to tens of thousands of new users. CryptoKitties, launched in December of 2017, is a game where you can buy, breed and sell cartoon kittens (and their associated NFTs) using the cryptocurrency Ether. During the first year after the game was released, users spent the equivalent of more than $34 million on the collectibles.

Four years later, NFTs have become associated with digital NBA trading cards, limited-edition weapons from video games and works of art like Beeple’s. “NFTs and cryptocurrencies are great examples of a spontaneous, grassroots consensus emerging,” says Luca Maria Aiello, a data scientist at the IT University of Copenhagen. “At some point, for some reason, people decide that a certain token, or a string of characters, or computation has a monetary value.”

But as with many technological innovations, the hype around NFTs has far outpaced any concrete knowledge of the technology's overall impact. Already, concerns over the environmental toll of blockchain technology have dampened the buzz around NFTs and cryptocurrency. But the question remains: What is the overall impact of NFTs on culture and economics?

The Socioeconomics of NFTs

This fall, a research team including Aiello, led by Andrea Baronchelli and funded by the Alan Turing Institute, scrutinized a massive dataset that included the bulk of all NFT transactions between June of 2017 and April of 2021. In their analysis, the scientists attempted to understand the driving forces behind the emerging market.

Since their earliest intersection with the fine art market, NFTs have been touted as a democratizing force. Proponents believe that NFTs will allow creatives to profit off of their work without having to overcome the socioeconomic barriers to traditional success in the fine arts. “Blockchain companies such as SuperRare generally sell digital works outside the taste-making and gate-keeping systems of the upper echelons of the traditional art market,” the authors of a 2021 paper on NFTs in the arts wrote.

But although NFTs may be valued by a different audience, this doesn’t mean that the NFT market is inherently more egalitarian than the traditional art market. In the Turing Institute study, researchers found that 10 percent of NFT traders performed 85 percent of all trades and exchanged 97 percent of all NFTs at some point during the study period. “There is a core of very active, very engaged people, most likely driven by certain advantages — it could be profit, it could be publicity," Aiello says. "These are the people that move the market."

In addition, the study found that 75 percent of NFTs sold for less than $15, while only the top 1 percent of NFTs were traded for more than $1,500. So, while artists like Beeple have attained generational wealth through the NFT market, most creators are making chump change in comparison.

While NFTs haven't yet sparked a sea change in the power structures of the art market, the technology does come with some promising tools. Because NFT transactions are carried out on a publicly-accessible blockchain, artists can embed code in the original token so that they are notified, or even paid royalties, every time it's traded. “There are several fascinating properties of NFTs that are, in principle, very positive," Aiello says. "Actions can be triggered by NFT sales. Other systems can’t guarantee this."

Any system of value — or item of value for that matter — comes with a degree of predictability. Gold, for example, is thought to have a very predictable value over time; therefore it is considered a relatively “safe” investment. On the other hand, a stock can be highly unpredictable, so it is comparatively considered a “risky” investment. In the Turing Institute study, Aiello and his colleagues investigated the predictability of the NFT market.  “If you could very accurately predict the price of an NFT, then it’s not really fungible anymore. It’s like money,” Aiello said. “But if there is marginal predictability, then there is more of a potential edge for people to invest into the market and attempt to predict prices.”

To investigate, the researchers designed a machine learning-based model to predict the price that a given NFT would sell for. When they tested the model on a dataset of actual transactions, their results were unsurprising given what they had already observed in previous analyses. The sale price of similar NFTs combined with the the popularity of the NFT trader accounted for up to 60 percent of the variability in the data, indicating that the biggest drivers behind the price of an NFT seem to be market speculation and collective thinking.  Interestingly, the researchers also studied whether the visual components of a given NFT were predictive of its selling price. Say, are an NFT creator’s aesthetic color choices and striking imagery rewarded by higher trading prices? The answer is… somewhat. Visual characteristics improved the accuracy of the researcher's model by 10 to 20 percent.

All together, these predictors may shine a light on some of the vagaries of the NFT market. But, overall, Aiello warns against using the model for investment advice. “We didn’t find a silver bullet,” he says. “It’s an extremely risky endeavor financially, and it’s definitely not for the masses.”