Protect Your Phone with Shock-Absorbing Nanotubes 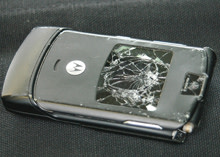 Cell phones are fragile: One slip of the fingers and yours can be headed for a disastrous meeting with the sidewalk, leaving you headed to the store for a replacement. Once again, however, nanotechnology might be coming to our rescue. Clemson University scientists led by Apparao Rao say they've created a new process to help make phones, car bumpers, or other often-broken items a little more resilient. The researchers built beds of tiny coiled carbon nanotubes that act as spring-like shock absorbers, protecting the object from a fall or collision. It was no secret that putting a slew of carbon nanotubes together could create this effect; Rao and his team say the difference in their process is that they can create a layer of shock-absorbing tubes in a single step. Only coiled tubes and not straight ones completely bounce back after impact, Rao says, but creating coiled tubes had been too expensive and time-consuming to be used at an industrial level before this finding. Now, if only they could make cell phones waterproof, too.