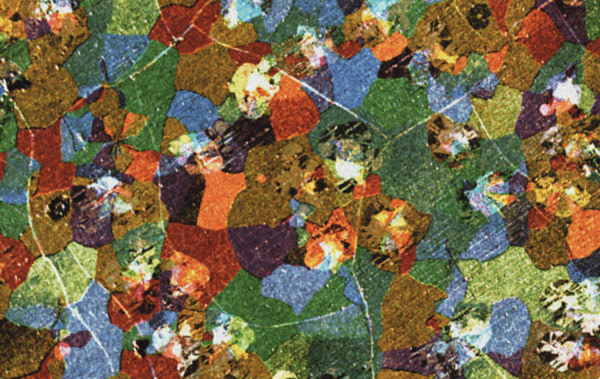 This picture may look like an exuberant patchwork quilt, or a stretch of really interesting farmland as seen from an airplane. In fact, what you're looking at is sheet of graphene--a one-atom-thick layer of carbon, measuring about 100,000 atoms across. The image, produced by an electron microscope, reveals that the honeycomb-like lattice of carbon atoms that forms a sheet of graphene is full of irregularities. Each sheet is composed of patches of atoms, and each patch has a slightly different rotation than that of its neighbors. By firing electrons at a sheet and using different colors to identify the angles at which the electrons bounced back, researchers made this rainbow image of a graphene sheet with the patch boundaries clearly shown. Lead researcher David Muller says this is an easy and efficient way to understand a graphene sheet's properties.

"You don't want to look at the whole quilt by counting each thread. You want to stand back and see what it looks like on the bed. And so we developed a method that filters out the crystal information in a way that you don't have to count every atom," said David Muller, professor of applied and engineering physics and co-director of the Kavli Institute at Cornell for Nanoscale Science. [press release]

, which was published in Nature, will be useful as nanotechnologists continue to investigate graphene's exciting electrical properties

. Researchers had previously thought that larger patches would improve the electrical conductivity of graphene, but Muller's experiments suggest that theory is wrong. Rather, it's impurities in graphene sheets that interfere with their conductivity, he argues. Related Content: 80beats: The 2010 Nobel For Physics Goes For…