Pentagon's New Plan to Rain Down Painful Beams From the Sky 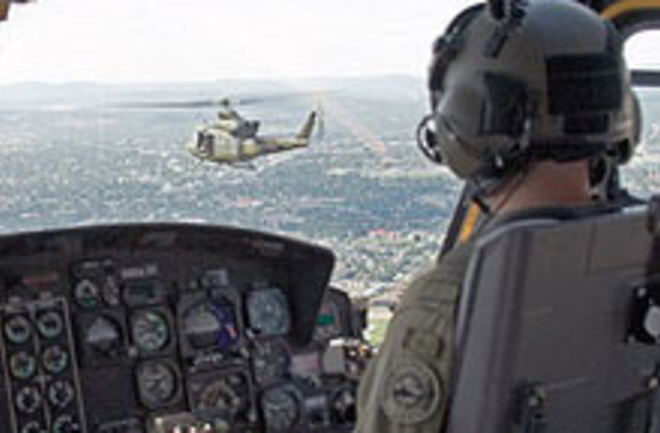 You may recall the so-called "pain guns" that the U.S. military has been working on for some time. Maybe you thought that the contraptions, which would shoot out low-intensity microwaves to cause a painful skin sensation, could do you no harm, so long as there wasn't a soldier aiming a futuristic-looking zap-gun at you. Think again: An antenna that emits the waves and can be carried by aircraft is now in development by the Pentagon as a not-usually-deadly way to control large groups of people. New Scientist reports:

The transmitting antenna on the current system is 2 metres across, produces a single beam of similar width and is steered mechanically, making it cumbersome. At the heart of the new weapon will be a compact airborne antenna, which will be steered electronically and be capable of generating multiple beams, each of which can be aimed while on the move.

This system remains controversial, and it's not hard to see why: Although the intensity of the microwaves that would ordinarily be used do not skin damage, an intensity slightly higher than that can cause severe burns. That happened in 2007, when a U.S. airman received second-degree burns while testing the device. So whether skin is entirely microwave-safe remains to be seen. Related Content: Discoblog: Update: “Corpse-Eating Robot” Actually a Vegetarian Discoblog: Nuke Your Tumors! Surgeons Use Microwaves to Zap Cancer Discoblog: Using Microwaves to Zap Marine Stowaways