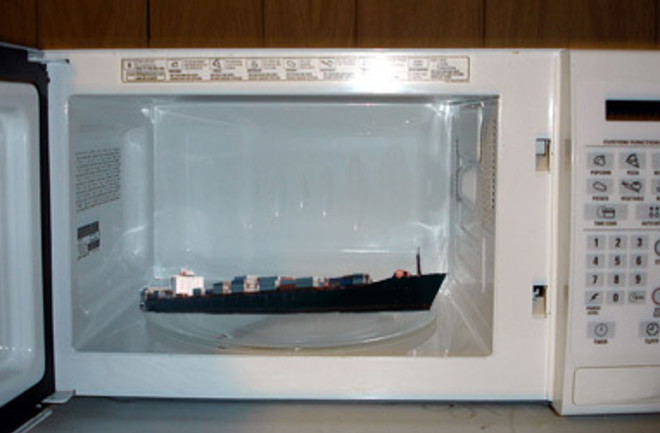 Is there anything microwaves can't do? They create perfect s'mores, cause light bulbs to glow in every color, turn grapes into glowing balls of plasma, and make fireballs out of toothpicks (not to mention creating Internet, cable TV, radar, GPS, and, oh yes, heating up food). And now, a group of researchers at Louisiana State University have developed a system that will use microwaves to kill marine life trying to hitch free rides on cargo ships. When a large container ship's cargo is unloaded, it must replace the weight of the cargo by pumping in seawater into the ballast to maintain stability. But along with water, anything small enough to get through the ballast intake pumps gets in—including bacteria, small invertebrates, and the eggs, cysts and larvae of various species. When the ship reaches its destination in faraway waters, it picks up its new cargo and dumps the ballast water—releasing all the marine hitchhikers into a new home. There, they can harm the local environment by competing with native species and damaging ecological stability, and even spreading human diseases. With ships transferring 10 billion tons of ballast water every year, these "alien invaders" are now, according to the UN, one of the four main threats to the world's marine ecosystems. The team at LSU intends to fit a microwave device on the exit valve of the ballast tank, blasting the outgoing ballast water to kill any transported marine life. The benefits of using microwaves (about six times as powerful as your home microwave) instead of a standard heating procedure is that it instantaneously heats the entire volume—which is the same reason water in a microwave oven can attain temperatures over 100 °C. Currently, the technique is too expensive to be practical, but the researchers hope it will soon supplement current ballast water control systems. Image adapted from: SmartGoat/Flickr