Police May Soon Use Pain Guns That Heat Skin With Microwaves 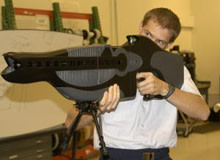 In several years police officers may have laser or microwave guns to point at miscreants, according to the Justice Department's research and development agency. These nonlethal weapons

build on knowledge gained from the Pentagon's controversial Active Denial System (ADS) - first demonstrated in public last year, which uses a 2-metre-[wide] beam of short microwaves to heat up the outer layer of a person's skin and cause pain. Like the ADS, the new portable devices will also heat the skin, but will have beams only a few centimetres across. They are designed to elicit what the Pentagon calls a "repel response" - a strong urge to escape from the beam [New Scientist].

But the idea of giving cops a tool capable of instantly inflicting pain from across a town square is raising protests from human rights advocates. The Justice Department is working on two separate weapons. One, the Personnel Halting and Stimulation Response, or PHaSR, uses an infra-red laser to heat a patch of skin about 4 inches in diameter, and pairs that heat with another bright laser that dazzles the eyes. The PHaSR looks like a bulky rifle, and law enforcement officials say that a cheap, portable version could be very useful to police and prison guards.

Sid Heal, formerly a Commander in the Los Angeles Sheriff's Department (and before that a Marine) , has long been an advocate of non-lethal weapons and thinks the new devices might have potential. "Needless to say, the “market” is so vacant with alternatives that ANYTHING is going to be appealing at this point" [Wired News],

says Heal. The other weapon is a scaled down version of the Pentagon's Active Denial System, and uses a microwave beam to heat the target's skin. This device isn't as far along as the PHaSR--so far it's a tabletop prototype with a range of about a meter--but researchers say it could ultimately be more effective, as its waves are better able to penetrate clothing and heat the skin underneath. But some critics say that the more effective these devices are, the less they like them.

Security expert Steve Wright ... describes the new weapons as "torture at the touch of a button". "We have grave concerns about the deployment and use of any such devices, which have the potential to be used for torture or other ill treatment," says Amnesty International's arms control researcher Helen Hughes [New Scientist].

There's no word yet on when these weapons might be tested in city streets or prison corridors, and many ambivalent commentators seem content to have the ray guns confined to the Justice Department's labs for the time being. Says one pundit:

It's good news that the police are developing weapons that don't kill people, but when you look at the way police are all-too-eager to use Tasers, you might consider whether this is a good thing or not. We're thinking they can be either good or bad, depending on who wields them. While we're wondering why we can't all get along, we're also thinking to ourselves, "Don't microwave me, bro!" [DVICE].