By repairing and refueling satellites in space, fewer satellites would have to be launched into low-Earth orbit. 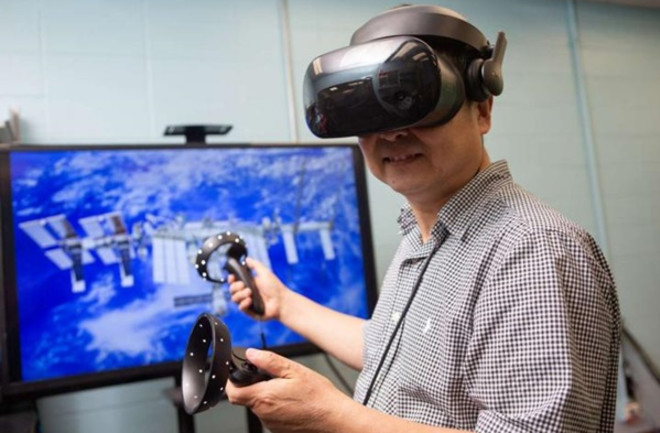 Ou Ma testing out the technology that would allow satellites to repair and refuel each other in space. (Credit: Andrew Higley/UC Creative Service)

Researchers at the University of Cincinnati are developing a new robotic network of spacecraft that could help satellites repair each other in low-Earth orbit.  The effort is being led by aerospace engineer Ou Ma, who has worked on projects relating to the robotic arms on the International Space Station and the space shuttle. The team’s plan is to develop a network of robots that can work together to eventually repair a satellite in space.  Satellites break easily and often as they orbit Earth, but there’s not an effective way to repair them. So Ma, along with senior research associate Anoop Sathyan, and a group of students, put robots to the test. They had the bots move strings with an attached token to a specific spot on a table. Because the robots can only control one string individually, the other robots had to work together to eventually move the tokens to the correct spot.

The researchers found that using five robots allowed them to complete the task, even if one of the robots failed.  The project will help the students create automated navigation so satellites can dock up without bumping into each other in space, sending the objects tumbling.  Once a satellite is launched, it’s impossible to repair or refuel it in low-Earth orbit. This leads to a number of useless satellites drifting through LEO. A human mission to repair every broken satellite would be too costly to be effective. But with more and more satellites being launched, fixing a few of them would be an effective way to reduce the number orbiting Earth.

As humans keep putting satellites into space, the risk of these human-made objects colliding into each other grows with every launch. The preexisting debris and naturally occurring micrometeoroids surrounding Earth are already a concern. But when these objects collide with each other, they create even more debris. The potential runaway debris problem, dubbed the Kessler effect or Kessler syndrome, has become a growing concern as more and more satellites are sent into space.

SpaceX recently started launching their Starlink satellites, which could eventually create a constellation of over 30,000 satellites to provide internet globally. Every few weeks, batches of 60 satellites will be sent into space until the constellation is complete. With an even greater influx of satellites, attention is turning toward repairing existing satellites instead of replacing them with new ones when they run out of fuel or something minor breaks.  And the University of Cincinnati team aren’t the only ones thinking about repairing satellites. NASA announced a few years ago they were creating a servicer spacecraft called Restore-L, which will launch in 2022 with a singular mission to service satellites.  “Restore-L servicer will rendezvous with, grasp, refuel, and relocate a government-owned satellite to extend its life,” according to the Restore-L website from NASA. The European Space Agency also has plans to launch one of these orbiting mechanics. It’s a servicing satellite they call e.Deorbit. Originally designed as a satellite which would capture and deorbit other satellites, the plan was revamped in 2018 to allow for refueling and refurbishment of other satellites. e.Deorbit’s planned launched isn’t scheduled until 2025.