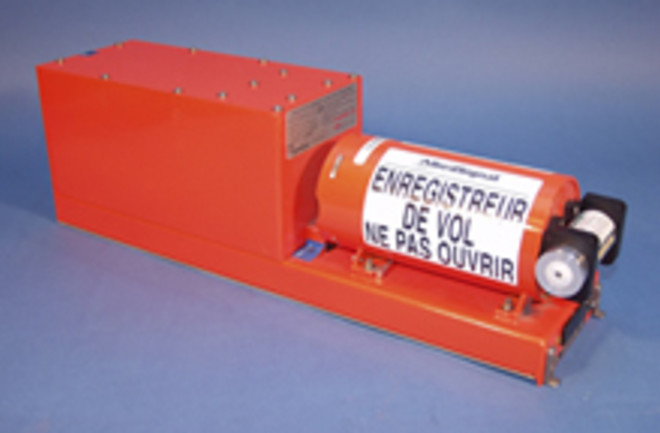 A French nuclear submarine has joined the search for the "black box" of Air France Flight 447, which disappeared over the Atlantic last week with all of its 228 passengers.

The "black box" is actually an orange cylinder -- about 13 pounds of metal wrapped around a stack of memory chips and designed to withstand the force of being slammed high-speed into a brick wall. Actually a pair of devices -- the flight data recorder and a voice and audio recorder -- the equipment records virtually everything about how an airplane is working [CNN].

Aviation experts hope that the black box, if it can be located on the seafloor, will provide an explanation for what went wrong on the flight, which vanished so mysteriously. On board the French sub,

the Emeraude, crewmen called “golden ears” were straining to pick up in their headsets the acoustic pings aircraft black boxes are supposed to transmit for 30 days under water. Nothing is better equipped for such faint sounds than an attack submarine with sophisticated sonar gear for detecting vessels deep in the ocean, naval officers said [Times Online].

The nuclear sub will cover about 13 square miles of seafloor each day, but the pings from the black boxes are only audible within about three miles. French armed forces spokesman Christophe Prazuck says the sub's crew has its work cut out for them.

"There are big uncertainties about the accident site, the ocean floor is rugged.... It's going to be very complicated and we're going to need a lot of luck" to find the black boxes [AP].

The U.S. Navy has also contributed two sonar devices that will operate from surface ships, and which can pick up readings from as deep as 20,000 feet underwater. The wreckage from the Air France flight is estimated to be about 15,000 feet deep.

If the aircraft's two black boxes are located, a mini-submarine called the Nautile will be sent down to retrieve them. The vessel, which has a crew of three and is about [26 feet] long, is the same one which explored the wreck of the Titanic [BBC News].

Without key information from the Airbus A330's missing data recorders, investigators have focused on the possibility that external speed monitors — Pitot tubes — iced over and gave false readings to the plane's computers as it flew into thunderstorms.... The L-shaped metal Pitot tubes jut from the wing or fuselage of a plane, and are usually heated to prevent icing. The pressure of air entering the tubes lets internal sensors measure the speed and angle of flight. A malfunctioning tube could mislead computers controlling the plane to dangerously accelerate or decelerate [AP].