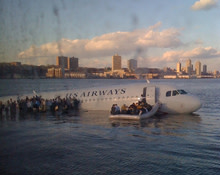 A flock of unfortunate Canada geese are thought to have crossed paths with a U.S. Airways Airbus A320 yesterday afternoon, causing the plane to make an emergency splash landing in the Hudson River. All 155 passengers survived with no serious injuries, but the incident is highlighting the problem of birds striking aircraft, which experts say is common but rarely dangerous.

Since 2000, at least 486 commercial aircraft have collided with birds, according to the Federal Aviation Administration. Of those incidents, 166 led to emergency landings and 66 resulted in aborted takeoffs [The New York Times].

Just seconds after take-off from LaGuardia airport, the pilot of the U.S. Airways plane reported a "double bird strike" that damaged both engines. Such collisions are most common at low altitudes and

the birds most likely to be sucked into aircraft engines are waterfowl, gulls, and raptors. Canada geese, a frequent visitor to golf courses and open spaces in the metropolitan New York area during the winter, pose a particular danger to planes because of their size. The impact of a 12 pound bird hitting a plane traveling at 150 miles per hour is equal to that of a 1,000 pound weight dropped from a height of 10 feet, according to experts on bird strikes [The New York Times].

But smaller birds can pose dangers too.

Sometimes the impact can cause the engine blades to break off, becoming dangerous pieces of shrapnel that further destroy the engine. Airplanes are designed with bird strikes in mind and all commerical aircraft must pass simulated avian collision tests.

In the physical tests, the engines are revved to full power inside a test facility and absorb various kinds of birds, from those the size of sparrows to those the size of herons, one at a time. (The birds are already dead.) The engines also ingest multiple birds meant to simulate a collision with a flock, said Matthew Perra, a spokesman for the engine manufacturer Pratt & Whitney [The New York Times].

Officials also use a variety of creative techniques to keep birds away from runways, including habitat modification, recordings of predators, releasing actual predators like falcons, and "hazing." USDA spokesman Larry Hawkins explains that hazing

can involve everything from setting up brightly colored scarecrow-type balloons that frighten birds to audible scaring. The latter involves "setting off a device that's like a 4th of July screamer-type firecracker" whenever flocks of birds are spotted [Discovery News]. In extreme cases, airports may be forced to relocate or exterminate entire flocks.

The incidence of bird strikes may have increased in recent years due to the confluence of two otherwise positive trends: successful conservation efforts and improved technology that allows faster and quieter aircraft. Rory Kay of the Air Line Pilots Association says new aircraft are more difficult for birds to detect and

often, birds are sitting quietly until they hear an airplane coming, and then trying to get away, fly up and wind up striking the plane [AP]. However, the hazard of bird strikes have been known almost as long as the history of aviation. One of the earliest human victims was Calbraith Rogers, the first person to fly across the U.S. In 1912, only

months after he completed his historic journey, he flew his biplane into a flock of birds and crash landed, dying of a broken neck [BBC News].

Related Content: DISCOVER: It's a Bird! It's a Plane! Now It's Just a Plane